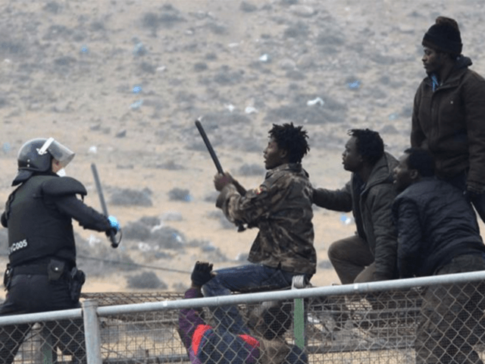 Footage has emerged of the “extremely violent and organised” attempt by over one thousand would-be African migrants to break into Spain’s North African territory of Ceuta on Sunday.

Five Spanish policemen and around 50 members of the Moroccan forces were injured during the massive border raid, including one who lost an eye.

The army of migrants used weapons including metal bars as they attempt to breach gates and double fences to enter the small piece of Spanish territory.

Video from the scene shows large numbers of migrants perched on fences where they were halted by Spanish and Moroccan forces before being removed with cranes.

Both Spanish and Moroccan authorities have responded with aggressive rhetoric, promising to punish and deport those responsible.

The migrants tried “to force open some of the doors in the external fence, using iron bars, wire cutters and large stones, with which they assaulted Moroccan forces and [Spanish] Guardia Civil [police] agents,” the central government’s representative office in Ceuta said in a statement.

“From now on, those making such attempts will be presented before the competent judicial authorities, who will decree their expulsion from the kingdom [of Morocco] or heavier penalties, according the gravity of the act,” Morocco’s interior ministry added in a further statement.

Figures released last week by the United Nations High Commissioner for Refugees (UNHCR) showed that whilst Spain is still a relatively unpopular destination for migrants compared to Greece and Italy, numbers are growing.

More than 173,000 migrants had entered Europe via Greece by December 29th, and nearly 7,000 had made the short crossing from Morocco to Spain.

Spain is keen for its small enclaves in Africa not to become easy entry points into Europe. Once inside the fenced off areas, migrants can claim asylum and are often transported to mainland Europe.

To stop this, Spain has built substantial fences and actively works to keep the exact location of the official border secret so migrants can be removed even if they cross the barriers.

This has led human rights groups to criticise the policy of turning people back to Morocco immediately after such incidents, depriving them of the chance to claim asylum.

In October of this year, there were two successful attempts to cross the fences in Ceuta, with around 70 sub-Saharan African migrants makingit across the barriers on the 14th, before chanting “victory, victory”, and a further 220 forcing their way in at the end of the month.