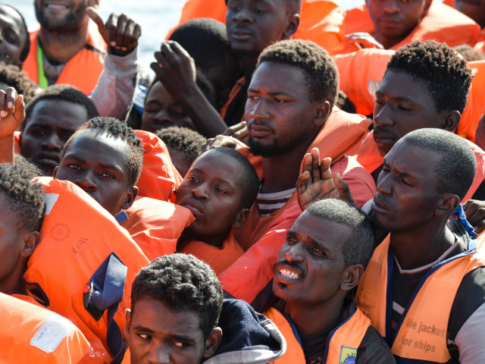 Hundreds of migrants arriving on the Greek island of Lesbos have claimed that they came from a “dissolved” migrant camp in north-west Turkey, and Greek port authorities allege the Turkish coastguard that monitors the Aegean Sea border has “disappeared”.

On Friday 200 migrants, mostly originating from Africa, travelled across the Aegean Sea and landed on the eastern Greek island of Lesbos. In addition, the European Union (EU) border agency Frontex picked up 66 migrants off the coast of Chios. On Saturday morning, a further 330 arrived on the both islands.

Journalists on Lesbos reported that the majority of the arriving migrants had told authorities that they had been interned in closed and controlled camps in north-west Turkey, and that these camps had been “dissolved” in recent days.

It has also been observed by Greek port authorities that the Turkish coastguard, which usually operates in the sea area of the border in the northern Aegean, has “disappeared”.

The Greek Ministry of Migration confirmed the increased number of migrants arriving on the islands adding that they are observing the phenomenon closely.

The newly-landed migrants also claimed that thousands of Africans who arrived on the coasts of Turkey are looking for a way to pass to the Greek islands.

These reports come less than a fortnight after Greek intelligence had disclosed that the Turkish government plans to allow 3,000 migrants to leave their shores every day to head for Greece.

The EU-Turkey migrant deal, where Turkish President Recep Tayyip Erdoğan promised to stem the flow of migrants from the Middle East and Africa from his country to Europe in exchange for financial support for migrant care, visa-free travel in the Schengen Zone, and accelerated EU membership, is on the verge of collapse following allegations by the Islamist president that the EU has not kept up with its end of the bargain.

European leaders deny Erdoğan’s allegations, but many have voiced their concern over the Near Eastern nation’s accession to the bloc due to Turkey’s human rights abuses and the recent crackdown on the media and mass arrests following the failed coup in July.

The total number of migrants accommodated on Lesbos and Chios has now reached 11,112, and throughout Greece there are reportedly 62,380 migrants.

According to an International Organization for Migration (IOM) report released on Tuesday, over 351,000 migrants crossed into Greece and Italy since the beginning of 2016 compared to 883,393 this time in 2015. But if Turkey has begun to roll back its border security, Greece could see those figures rise again to the level at the height of the migrant crisis.

The EU announced on Thursday that member countries could begin returning migrants to Greece in March 2017, in an effort to reinstate the bloc’s Dublin asylum rules whereby migrants must have their asylum request processed in the country in which they first land.

In a letter to the EU interior ministers and the EU Commission on Friday, Greek Migration Minister Yiannis Mouzalas pleaded with the supranational bloc to support them in reducing the population of overcrowded migrant camps on the Aegean islands.