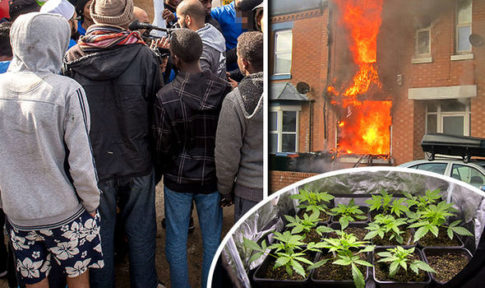 – Refugees housed by YOUR CASH have ‘burnt down homes, attacked staff and grown drugs’:

EXCLUSIVE: Asylum seekers housed by the taxpayer have trashed and burnt down the properties and attacked or abused support staff employed to look after them, without facing any punishment, it has been claimed.

G4S, one of three companies hired by the Home Office under the COMPASS contract to house asylum seekers across the UK, has told of an increased number of attacks on its staff by refugees in 2016 – a year that also saw the number of refugees it has housed rise by 13 per cent due to increased immigration and more arrivals from Syria.

G4S is currently housing 18,639 asylum seekers and says only a minority are causing the serious problems.

The news comes as the Home Office announced last night it has ordered asylum accommodation providers to improve and increase their stock to meet an increase in demand, with record numbers expected to arrive next year.

Ministers want those who arrive in the UK, many illegally, put up in more “suitable properties” while their claims are processed.

G4S revealed the arson and assault problem in written evidence to an ongoing Home Affairs Select Committee inquiry into the standard of asylum seeker accommodation funded by taxpayers.

The report said: “A minority of asylum seekers display violent and destructive tendencies.

“That behaviour at times manifests itself in attacks on our staff and damage to properties.

“Assaults on G4S welfare staff or another service have increased and stand at 73 so far this year.

“So far in 2016, 14 properties have been seriously damaged by service users – usually through fire damage – rendering the property unusable and increasing the use of hotels.

G4S also claimed that despite reporting incidents to the authorities, in the main the perpetrators were getting away with it.

The report added: “G4S reports each incident to the Home Office and or to the local police. In most cases no sanction is applied.”

But, refugee support charities and organisations have given evidence to the inquiry saying the standard of accommodation offered by G4S is often so poor that it is the cause of friction between the firm and the people it is supposed to be helping.

Sandwell Women’s Aid (SWA) said in its report to the inquiry it was inundated with complaints about the standard of housing.

The SWA report said: “The majority of the properties provided under the COMPASS contract have been of very poor quality.

“We have repeatedly raised concerns/issues of rats or mice infestations.

“In addition to this, we have had several issues around repairs, we have had stairs falls through, a ceiling fall in whereby there was a near miss – the client and a baby were in the lounge.

“We have experienced severe damp issues, boilers not working and housing officers stating they must wait 28 days for repairs.

“GP’s and any other relevant agency involved who are in agreement with SWA that these conditions are having a negative impact on their mental health, not mentioning their safety.”

The report added that refugees had often been victims of trafficking, and problems occurred because they were not always told where they were being taken, triggering bad memories.

It added: “This can bring up anxieties around their trafficking experience, being “put in a van and not knowing where they are going.

“SWA say that in their experience, it appears that the assessment team are not communicating with G4S.

“In our experience and feedback from our clients as well as seeing the impact this has on our clients, this has caused further trauma to our clients, especially as hotels are a mixture of males and females.

“Again, the impact of this that we have visually seen ourselves has caused extreme negative impact on their mental health.”

The organisation cited one disturbing case in an undisclosed area when a refugee in temporary housing was coerced into growing cannabis by local criminals.

The report addd: “Another example we have is when our male client, from the EU, was accommodated by the local authority and was terrorised by the neighbours to be involved in

cannabis cultivation in his flat.

“This was reported to the police, however, no actions were taken to my knowledge.

“This terror continued for months and the client’s flat was broken into and trashed, there was also a physical altercation.

“In the end, client could not handle this any longer, as housing was refusing to re-accommodate him.

“Out of fear for his life, the client absconded.”

However, a spokesman said: “The UK has a proud history of granting asylum to those who need our protection and we are committed to providing safe accommodation while applications are considered.

“The extended arrangements will continue to provide value for money for the taxpayer.”

Express.co.uk contacted G4S to ask why there had been no prosecutions over the arsons.

A spokesman said in a number of cases asylum applicants had been arrested, but the CPS had refused to charge the individual suspects.