Liberals in the city of Portland Oregon have put their foot down against income inequality.

The “Orecrats” are not going after CEOs, but rather corporations that have CEO salaries the “Orecrats” deem excessive.

The tax penalty on corporations is as much as 25%. 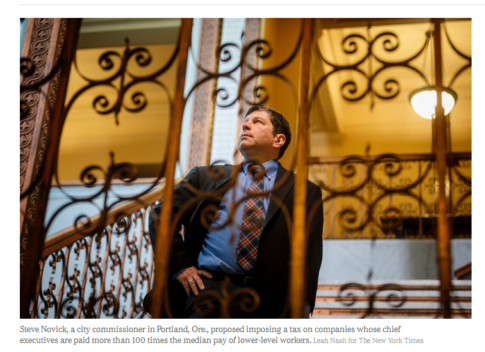 Moving to address income inequality on a local level, the City Council in Portland, Ore., voted on Wednesday to impose a surtax on companies whose chief executives earn more than 100 times the median pay of their rank-and-file workers.

The surcharge, which Portland officials said is the first in the nation linked to chief executives’ pay, would be added to the city’s business tax for those companies that exceed the pay threshold. Currently, roughly 550 companies that generate significant income on sales in Portland pay the business tax.

The tax will take effect next year, after the Securities and Exchange Commission begins to require public companies to calculate and disclose how their chief executives’ compensation compares with their workers’ median pay. The S.E.C. rule was required under the Dodd-Frank legislation enacted in 2010.

Thomas Piketty, a professor at the Paris School of Economics and an authority on income inequality who wrote “Capital in the Twenty-First Century,” said he favored the Portland tax as a first step.

“This is certainly part of the solution,” Mr. Piketty wrote in an email, “but the tax surcharge needs to be large enough; the threshold ‘100 times’ should be substantially lowered.”

Another supporter of the tax is Charlie Hales, the mayor of Portland.

“Income inequality is real, it is a national problem and the federal government isn’t doing anything about it,” Mr. Hales, a Democrat, said in a telephone interview. “We have a habit of trying things in Portland; maybe they’re not perfect at the first iteration. But local action replicated around the country can start to make a difference.”

Mr. Hales, who did not seek re-election, will leave office at the end of the month.

If possible, CEO’s will take stock options and bonuses to escape the rule. If this idea catches on (and most economically foolish ideas promoted by the Left do catch on) corporations will reduce hiring and expansion plans.

Economic illiterate of the day, Thomas Piketty, says “the threshold ‘100 times’ should be substantially lowered.”

It would behoove Piketty to think about what the real problem is, instead of attacking symptoms of the problem.

The problem is not CEO pay. The problem is a Fed hell-bent on promoting inflation in a deflationary world. Combine that with financial repression tactics of central banks that have negative interest rates on 75% of the world’s bonds.

The Fed explicitly targeted asset prices and bailed out the banks at taxpayer expense. Congress passed scores of “affordable housing programs” that benefited homebuilder CEOs more than anyone else.

The Fed has a very Asymmetric Policy of ignoring asset bubbles then bailing out the corporations involved in them.

Fisher stated negative rates “seem to work” while admitting they are bad for savers but they “typically they go along with quite decent equity prices.”

In a foolish attempt to defeat routine consumer price deflation, the Fed has sponsored yet another asset bubble that will bring about damaging asset bubble bust and credit deflation. The BIS would agree.