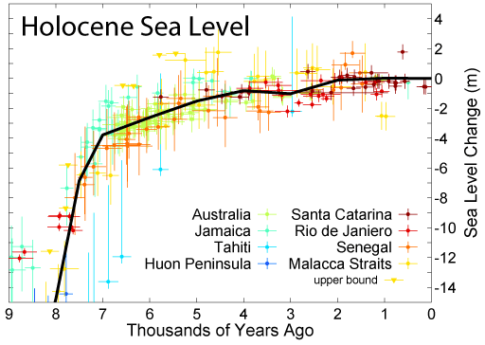 This talk of unprecedented sea-level rise is complete nonsense.

Today’s sea-level rise is BELOW normal

During the last ice age almost all of Canada, along with parts of Europe and Asia, were buried beneath one to two miles of ice. At the same time, sea levels stood 350 to 400 feet lower than today.

Sea levels were so low that the entire continental shelf, at least in eastern North America, was above water. Many states on the eastern seaboard were twice as big as today. New Jersey’s shoreline, for example, stood 60 to 100 miles east of its present location.

Same in the west.

The land between Alaska and Asia rose out of the sea like a bridge (or rather, the sea dropped away from the land), and the Bering Strait, which today is only 18 stories deep at its deepest point, was above water. Our ancestors could have walked to Siberia. (The word bridge is misleading, because the land connection between Alaska and Siberia was almost as wide as Alaska itself.)

Why were sea levels so low? Because that’s where the water came from to create those huge ice sheets. Literally millions of cubic miles of water had turned to ice.

Then, about 10,000 years ago, the ice began to melt and sea levels began to rise.

Rising sea levels have been the norm

And that brings us to today. What are sea levels doing right now?

That doesn’t even take into account the fact that sea levels declined in both 2010 and 2011.

Yes, no matter how assiduously the media tries to ignore it, sea levels actually declined in both of those years.

Where is the water going?

It’s being locked up on land as snow and ice. That’s how ice ages begin.

If we keep getting record snowfall as we have during the past few years, sea levels will begin falling and won’t begin rising again until the end of the next ice age.

This talk of unprecedented rising sea levels and catastrophic global warming is complete nonsense. It is just simply not true.

Just under half-an-inch. That’s how much sea levels have been rising on average per year for the past 10,000 years.

Today, sea levels are rising only 1/8 of an inch per year, LESS than normal.

Robert Felix is author of Not by Fire but by Ice, in which he maintains that the next ice age could begin any day.
See www.iceagenow.info