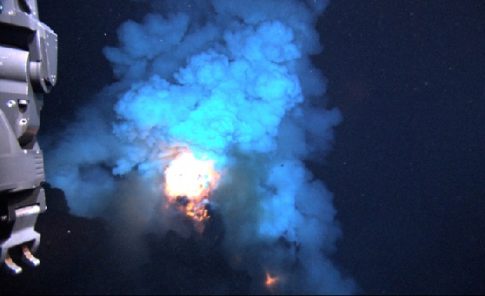 Superheated molten lava about 1,200ºC (2,200ºF) erupts, producing a bright flash as it blows into the water before settling back to the sea floor. Image courtesy of NSF and NOAA

– As many as ten million underwater volcanoes:

And we wonder what is heating our seas

Ten million underwater volcanoesAnd we wonder what is heating our seas
By Robert W. Felix

We’ve learned a lot in the last 25 years, especially when it comes to underwater volcanoes.  When I began researching and writing Not by Fire but by Ice in 1991, scientists guestimated that there were 10,000 submarine volcanoes in the entire world.

And they were huge. (Still are.) Some of the newly-found volcanoes rose almost 1½ miles above the seafloor. Even then, their peaks remained about 1½ miles below the water’s surface. They’re packed into a relatively small area about the size of New York state.

We have no idea how many volcanoes may be lurking beneath the seas. What we do know, is that they are pumping awesome amounts of re-hot basalt – up to 1,200ºC (2,200ºF) hot – into the inky black water.

Superheated molten lava about 1,200ºC (2,200ºF) erupts, producing a bright flash as it blows into the water before settling back to the sea floor. Image courtesy of NSF and NOAA

Beginning with the first edition of Not by Fire but by Ice, I made the audacious suggestion that those underwater volcanoes were heating our seas. (See Chapter 10, “Fish Stew.” )

Global-warming alarmists scoffed. A mere 11,000 submarine volcanoes could not possibly be heating the seas. Impossible. After all, the oceans cover 71 percent of our planet.

But the number of underwater volcanoes kept climbing. By 2005, NASA was forced to admit that there might be one million submarine volcanoes. As many as 75,000 of those underwater behemoths soar half-a-mile above the surrounding seafloor and several thousand of those, in turn, might be active.

Even so, global-warming alarmists never wavered. One million underwater volcanoes were not enough to heat the seas.

Soon, the estimated number of submarine volcanoes had jumped to more than three million.

But any thought that three million underwater volcanoes might affect ocean temperature was considered heretical. I mean, natural forces couldn’t possibly be heating the seas. Could they? Let’s keep blaming humans.

How long can this denial continue? Especially with ever more discoveries coming to light.

Reader Joe Franco just sent me a study by professors Fisher and Wheat that estimates the number of hydrothermally active seamounts at somewhere between 100,000 and 10,000,000. (“Hydrothermally active” means they are heating the water.)

You read that right: Ten million!

The two professors base their conclusion on the fact that a significant fraction of the seamounts already surveyed appear to be hydrothermally active.

These seamounts are also huge. As many as a million of those planetary-sized hot water heaters have a diameter greater than 7 km and stand more than 2 km high (more than 4.2 miles across and 1.2 miles high).

So what do we have here?

A “significant fraction” of a million seamounts taller than Mount Washington, and up to ten million smaller hydrothermal features, the height of a 30-story building, are pumping vast amounts of heat into the seas, and we refuse to admit that they could be affecting ocean temperatures?

I think it’s time to wake up.