After launching Amazon Fresh, an online food delivery service, in numerous cities just a few years ago, Amazon has now decided it has to go “offline” to capture incremental share of the grocery market.  As such, the company today revealed its first brick-and-mortar small-format grocery store, Amazon Go, one of at least three formats the online retail giant is exploring as it makes a play for a higher share of grocery spending.  With in-store technology designed to track customers’ every step, the Amazon Go concept promises “No Lines” and “No Checkout.”

The first Amazon Go concept store is roughly the size of a convenience store, though according to the Wall Street Journal the company is also testing a drive-thru concept as well as a traditional 30-to-40,000 square foot grocery store that would combine in-store shopping and curbside pickup.

The Amazon Go store, at roughly 1,800 square feet in downtown Seattle, resembles a convenience store-format in a video Amazon released Monday. It features artificial intelligence-powered technology that eliminates checkouts, cash registers and lines. Instead, customers scan their phone on a kiosk as they walk in, and Amazon automatically determines what items customers take from the shelves. After leaving the store, Amazon charges their account for the items and sends a receipt.

Meanwhile, in the suburban Seattle neighborhood of Ballard, a handful of workers on Monday were finishing up one of Amazon’s two drive-through prototypes in the area, which according to the people close to the situation are slated to open in the next few weeks. The wood-paneled building with green trim and an overhang appeared to have at least three covered bays for cars to pull up and pick up orders, with a paved driveway in front.

The third concept, the newly approved multi-format store, combines in-store shopping with curbside pickups, according to the people. It will likely adopt a 30,000- to 40,000-square-foot floor plans and spartan stocking style like European discount grocery chains Aldi or Lidl, offering a limited fresh selection in store and more via touch-screen orders for delivery later. Stores in this format, which are smaller than traditional U.S. grocery stores, could start appearing late next year.

While the store formats are still in the concept stage, Amazon ultimately envisions opening up to 2,000 brick-and-mortar locations.

Amazon envisions opening more than 2,000 brick-and-mortar grocery stores under its name, depending on the success of the new test locations, according to the people. By comparison, Kroger Co. operates about 2,800 locations across 35 states.

Adding grocery pickups will be “part of their secret sauce in terms of all of the different ways in which they can engage the customer in bringing the product to them,” says Bill Bishop, chief architect at grocery and retail consultancy Brick Meets Click. “Everyone is looking at grocery because of frequency. Frequency guarantees that you have density.” 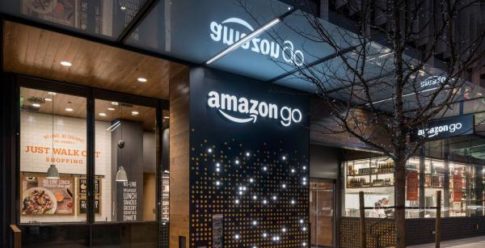 Of course, Amazon isn’t the first to test drive-thru and curbside grocery as Target and Wal-Mart both plan to launch curbside pickup in 1,000 stores by the end of next year.

Meanwhile, with nearly 40,000 grocery stores in the U.S. employing roughly 3.5mm people, most of whom work at or near minimum wage, Bernie’s “Fight for $15” agitators may want to take note of this development.