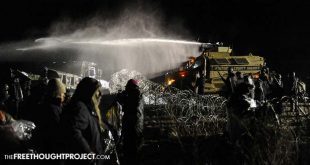 “The Morton County Sheriff’s office not only violates the constitutional rights of peaceful protesters, but their actions highlight the long history of abuse against Indigenous peoples,” said Water Protector Legal Collective (WPLC) attorney Brandy Toelupe. “From the beginning, governments have used their latest technologies to take land and resources from Native nations and oppress Indigenous peoples. Sheriff [Kyle] Kirchmeier’s actions make it clear that nothing has changed.”

An initiative of the National Lawyer’s Guild called the WPLC, according to the NLG website, filed the class-action suit “on behalf of persons who were injured on the night of November 20 and early morning of November 21, seeks an immediate injunction preventing the Morton County Sheriff’s Department and other law enforcement from using impact munitions such as rubber bullets and lead-filled ‘beanbags,’ water cannons and hoses, explosive teargas grenades and other chemical agents against protesters.”

Over concerns about accessibility for first responders, on the evening November 20, a group of water protectors set out to clear a roadblock of burned military vehicles from Highway 1806 in place since October 27 and since fortified by police with cement barriers and razor wire. Officers in military-style riot gear then began firing rubber bullets at the small group — attracting the attention of water protectors in the nearby Oceti Sakowin camp.

A group of water protectors rushed to the scene at Highway 1806’s Backwater Bridge and angrily chastised police for the unnecessary force. These heavily and unnecessarily militarized officers — instead of responding to concerns that ambulances have difficulties accessing and leaving the Standing Rock Sioux Reservation — unleashed the furious assault against the crowd as night fell. That offensive by police lasted for more than six hours — unrelenting in scope and force — leaving hundreds injured, a few severely.

Sheriff Kirchmeier continues to defend the all-out assault — even shirking responsibility for horrific injuries suffered by the group — claiming water protectors threw empty water bottles and other items at police, leaving one officer with a minor head wound. Despite controversial use of weaponized water in sub-freezing temperatures — and parallels to the use of fire hoses against black civil rights protesters in the 1960s — Kirchmeier boasted he wouldn’t hesitate to do it again.

However, the WPLC catalogued many of the wounds in its lawsuit, and the descriptions are a striking contrast to a single injury suffered by one officer:

The complaint describes the excessive force with which the nine class representatives were met while peacefully protesting. Five are Native, including two members of the Lakota Nation. Vanessa Dundon of the Navajo Nation was hit in the eye with a tear gas canister that was shot by police directly at the crowd of Water Protectors. Jade Kalikolehuaokakalani Wool had two grenades blow up near her head, knocking her down, burning her face and sending shrapnel into it, and causing her to be hospitalized. Crystal Wilson was shot with a water cannon, tear gassed and shot with a munition. David Demo was filming police when, without warning, they shot him with a water cannon and then in the hand with a munition. He was hospitalized with broken bones and was told he would need reconstructive surgery. Gary Dullknife III saw a Water Protector knocked to the ground by a water cannon. As police sprayed her on the ground, he tried to move her away. He was shot in the chest, stomach and leg by impact munitions. Mariah Marie Bruce was peacefully protesting when police sprayed her with water cannons. She was then hit in the genitals with a grenade, and was hospitalized. Frank Finan was taking pictures when he was shot in the abdomen and knocked to the ground by a rubber bullet. Israel Hoagland–Lynn tried to help two people who had been shot with water cannons and rubber bullets and was shot in the back of his head by an impact munition. He lost consciousness, was hospitalized, and needed 17 staples for a head wound. Noah Michael Treanor, while praying, was shot by the water hoses or cannon. Once on the ground, he was shot in the head by an impact munition. Bleeding badly, he was hospitalized.

WPLC lawyers rightly deemed the attack “violent, unjustified, and unprovoked” in the lawsuit — which calls for an emergency order to halt police use of impact weapons, chemical agents, weaponized water, and other dangerous and putatively ‘less than lethal’ items against the peaceful protectors.

President Obama, the Justice Department, and Washington officials have been silent on the abuses occurring in Standing Rock — and Senator Cory Booker only recently officially demanded the DOJ monitor the situation and launch a civil rights investigation.

Attorneys and their clients hope the lawsuit will help end the unjustified attacks on peaceful peoples whose sole desire is to protect the precious Missouri River and its watersheds from contamination with oil by a profiteering company who cares nothing for human and Indigenous rights. Ultimately, the most imperative goal is to halt construction of the Dakota Access Pipeline permanently.

“The civil rights violations that night were deliberate and punitive,” WPLC attorney Rachel Lederman asserted. “The Morton County Sheriff’s Department’s illegal use of force against the Water Protectors has been escalating. It is only a matter of luck that no one has been killed. This must stop.” 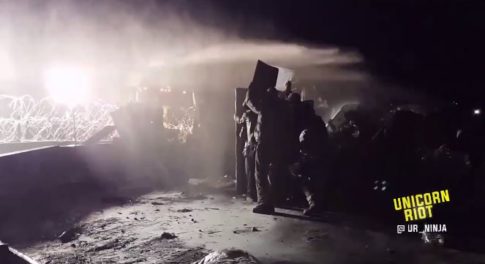