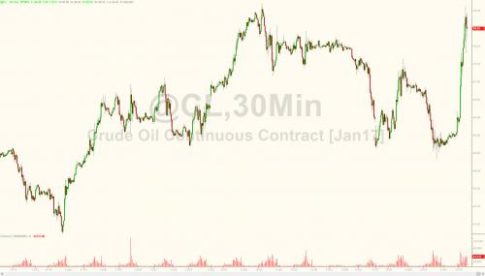 – Here Are The Details From The OPEC Production Cut Deal:

Update 5: as the meeting concludes, here are the details as they emerge one headline at a time:

Update 3:According to a Reuters source, UAE, Kuwait, and Qatar are expected to cut output by a combined total of 300,000 bpd.

Update 2: The next meeting which oil traders will be focused on, that between OPEC and Non-OPEC producers has been scheduled for December 9. It is unclear what happens to the “deal” if non-OPEC decides not to cut production or cuts less than expected. It is also unclear whether US shale producers will participate in this meeting.

Update: as expected, the deal is contingent: As Amena Bakr of the Energy Intelligence Group reports from Vienna, the Opec agreement is contingent on non OPEC and Russia is onboard to cut says gulf delegate. As a result, OPEC Likely to Meet With Non-OPEC Producers Next Week according to a delegate.

The much anticipated headline is out and, as Bloomberg reports, OPEC has reached a deal agreeing to cut oil production by 1.2 million barrels per day to 32.5mmbpd from the current level of 33.6mmbpd, according to a delegate. This would be OPEC’s first production cut since 2008.

Saudi Arabia, Iraq and Iran appear to have resolved their differences over production cuts for the time being, with the Saudis accepting that Iran can raise production to about 3.9 million barrels a day. Still it appears some last minute glitches remains:

Although as a local reporter notes, the Iraq issue appears to have been resolved:

According to other local reports, OPEC won’t wait for non OPEC to cut OOTT, and the deal goes effective in January and it’s for 6 months and can be extended.

In a potential twist, however, the agreement is also likely to include a reduction of about 600,000 barrels a day by non-OPEC countries according to Bloomberg. This means that there is an element of conditionality to the deal should Non-OPEC nations balk when they sit down with OPEC members next to discuss the final deal framework.

Some early skepticism to the deal has emerged from Commerzbank, whose analyst Carsten Fritsch notes that OPEC’s decision to cut production for the first time in 8 years is pushing prices higher, although the full impact on the market will depend on how the cuts are divided among member states. “Prices reacted positively but the devil is in the detail,” Fritsch said. “We have to wait for a country breakdown and whether it’s reliable or not.” Says the initial price reaction may have been muted as even higher numbers circulated in the market. Doesn’t expect to see a meaningful production cut from non- OPEC states.

We now await the details of who will cut and by how much, how will the production cuts be implemented and supervised, and whether the deal is conditional on Non-OPEC, mostly Russia, participation. Having soared over 7% in advance of the announcement, crude remained near its highs of the day.  The front-month Brent contract also resumes climb, trading $3.55 higher at $49.93.

1 thought on “OPEC Agrees To Cut Oil Production By 1.2 Million Barrels A Day – Here Are The Details From The Deal”