“Once the trains are deployed, Russia will be in possession of 36 megatons of mobile and ready-to-fire nuclear missiles.”

The tests for Russia’s “railway-based combat rocket system” took place on Plesetsk cosmodrone two weeks ago, Interfax reports and were “fully successful” according to a military source, which would “pave the way for further flight tests.” The tests were held to test the missiles’ launch readiness, Russian press added. 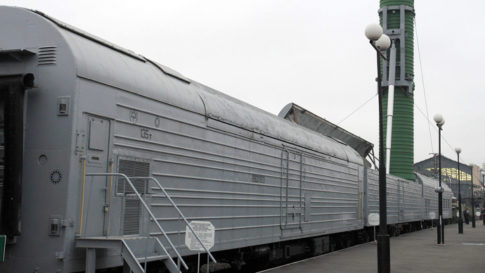 A BZhRK with a Molodets missile erected to launch position

The mobile weapons platform, made up of several train carriages designed to conceal the launchers of six Yars or Yars-M thermonuclear ICBMs and their command units, are expected to enter service between 2018 and 2020.

After first announcing the return of the nuclear trains, which had previously been banned, in 2014 Russia’s military then confirmed the trains are expected to be put into service in 2019. The nuclear trains, dubbed Berguzin after the strong eastern wind that blows over the Lake Baikal, aim to counter US’s Conventional Prompt Global Strike project, which would give the Pentagon the capability of launching attacks and precision strikes at any target in the world in one hour.

The Berguzins, which act as mobile platforms to transport and launch nuclear missiles, will be able carry up to 6 RS-24 Yars missiles, the International Business Times reported.  According to RT, Yars missiles can reportedly carry four warheads for a total yield of between 0.4 and 1.2 megatons.  While the missiles are less destructive than their predecessors, the Molodets missiles, they are more accurate, have a greater range and weigh roughly half as much. The lighter weight means that trains on which they are loaded do not require reinforced wheel-sets to carry the load.

This makes it harder for enemy spy satellites to identify the trains, as the carriages can be easily disguised as refrigerator cars. Once the trains are deployed, Russia will be in possession of 36 megatons of mobile and ready-to-fire nuclear missiles.

The commander of the Strategic Missile Forces, Colonel-General Sergei Karakayev, said the state-of-the-art Barguzin complex would outstrip its Soviet predecessor in all respects, including accuracy and range. Once launched, the complex will be in service until 2040.

During Soviet times, the Strategic Missile Forces had three divisions of rail-mobile missile systems “Molodets” (NATO reporting name SS-24 “Scalpel”). They were stationed in the Kostroma, Perm and Krasnoyarsk regions.

There were 12 “nuclear trains” in total, each carrying three missiles. The complexes entered service in 1987, just a few years prior the collapse of the USSR. The West dubbed the Soviet weapon “ghost trains.” The rail mobile missile complexes were disposed of from 2003 to 2005 without extending their life.   The “Molodets” nuclear trains were part of the START-2 Treaty for arms reductions.

The new Barguzin project does not have a goal to revive the erstwhile Soviet military project. This is an entirely new development. One of the obvious advantages of Barguzin trains is their mobility, although Soviet rail-mobile missile complexes were too heavy. It is worthy of note that the development of such systems does not come contrary to the START-3 agreement.

Russia’s latest advancement in its nuclear weapons technology comes shortly after the Kremlin announced the deployment of nuclear-capable missiles to the Kaliningrad exclave, as was reported previously. President Vladimir Putin’s spokesman, Dmitry Peskov, told reporters that the Russian military needs to respond to what he described as Nato’s aggressive moves.

“Russia is doing what is necessary to protect itself amid Nato’s expansion toward its borders,” Mr Peskov said adding that “the alliance is a truly aggressive bloc, so Russia does what it has to do. It has every sovereign right to take necessary measures throughout the territory of the Russian Federation.”

According to overnight press reports, Moscow also deployed new anti-ship missiles on Pacific islands controlled by Russia but also claimed by Japan. Bal and Bastion missile systems have been stationed on the islands, called the southern Kurils by Russia and the Northern Territories by Japan, the Boyevaya Vakhta (Combat Duty) newspaper of Russia’s Pacific Fleet reports.

The disagreement over the islands, seized by the Soviet Union at the end of World War II, has kept the two countries from signing a peace treaty formally ending their wartime hostilities.