Mr Trump told Fox News in January: “I think that climate change is just a very, very expensive form of tax. A lot of people are making a lot of money. I know a lot about climate change….I’ve received environmental awards.”

– Donald Trump says he believes there is ‘some connectivity’ between humans and climate change in major U-turn:

The President-elect had suggested climate change was a ‘hoax’

It is hard to keep up with the pace of change in the mind of Donald Trump.

Just hours after announcing he was not going to pursue an investigation of Hillary Clinton over her use of a personal email server, he indicated another important U-turn – this time in regard to climate.

During the campaign, Mr Trump has suggested climate change was nothing more than a “hoax”, and that the so-called myth may have been started by the Chinese.

However, in a conversation with journalists from the New York Times on Tuesday, he indicated he had rethought the matter.

Asked if thought human activity was linked to climate change; he responded: “I think there is some connectivity. Some, something. It depends on how much.”

He also said he would keep an open mind on whether he would pull the US out of a landmark international climate change deal.

During his presidential campaign, Mr Trump repeatedly said he would withdraw from the 2015 Paris climate accord. But on Tuesday, at a meeting with reporters that itself experienced a U-turn in regard to whether or not it would even take place, he said: “I’m looking at it very closely. I have an open mind to it.”

Mr Trump, who has been holed up for days in Trump Tower in New York as he puts together a team for his administration, told the reporters that he was also thinking about climate change in regard to American competitiveness and “how much it will cost our companies”.

He also said he thought clean energy was “very important”.

Travis Nichols, a spokesman for Greenpeace, told The Independent that regardless of what Mr Trump had said to the newspaper, the fact he had appointed a series of climate change deniers and oil industry lobbyists to his transition team indicated his administration would still be in “climate denial”. 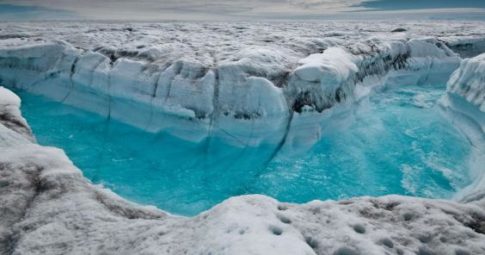 Mr Trump’s notoriety as a climate change denier dates back to 2012 when he said in a tweet: “The concept of global warming was created by and for the Chinese in order to make US manufacturing non-competitive.”

During the election campaign, he positioned himself as a defender of traditional industries, such as coal mining, and mocked Hillary Clinton’s talk of the need to invest in alternative energy.

Ms Clinton poked fun at Mr Trump’s position when she spoke on the campaign trail.

Mr Trump told Fox News in January: “I think that climate change is just a very, very expensive form of tax. A lot of people are making a lot of money. I know a lot about climate change….I’ve received environmental awards.”

– Anyone who says we’re enduring “unprecedented global warming” is lying or woefully misinformed: