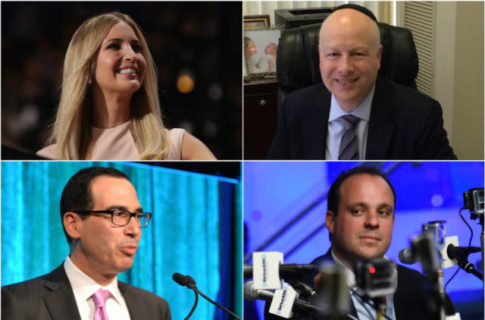 Trump is a Zionist puppet, created by kingpin of the Judeo-Zionist mob, AKA the Kosher Nostra, Roy Cohn. The Israeli press have been using reverse psychology to disguise the fact Trump is their boy by making false claims against him of anti-semitism and falsely claiming he would act against Jewish interests in the US – this is a ploy to appeal to the Nazis and far-right extremists that supported Trump at the ballot boxes.

However, as this article shows, Trump has surrounded himself with Jewish advisors, all of them with close ties to Israel.

Trump’s selection of Stephen Bannon as his chief strategist is yet another sign of the Israeli control of Trump – Bannon has long been a stooge of Benjamin Netanyahu, and will serve as Trump’s handler, relaying instructions from Netanyahu, in effect, Bannon is the strings that connect puppet Trump to puppetmaster Netanyahu. The ADL condemning Bannon’s appointment is just more reverse psychology to fool the dumb white folks.