– Mitt Romney Is The Real Super-Fraud: Here’s The Proof, Chapter And Verse 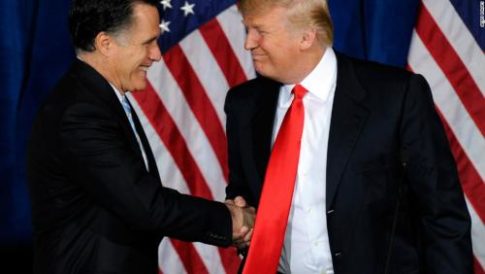 Update: According to NBC, Romney is reportedly being considered for Secretary of State.

Mitt Romney will meet with President-elect Donald Trump this weekend to discuss the position of Secretary of State, a source tells NBC News. It’s unclear if Romney, who was one of Trump’s more vocal critics within the GOP, will meet with Trump at Trump Tower or at another location on Sunday.

Trump has stayed mostly within the confines of his 5th Avenue skyscraper since his visit to Washington last Thursday to meet with President Obama and congressional leaders; however, he’s still meeting with potential cabinet members and plans to meet with Japanes Prime Minister Shinzo Abe on Thursday.

Earlier this year during the presidential campaign, the former Massachusetts governor criticized Trump’s candidacy, calling him a “phony” and “fraud.”

The latest troubling, if unconfirmed reversal on Trump’s promise to “drain the swamp” comes by way of CNN – so take it with a big grain of salt – which reports that Donald Trump will meet this weekend with one of his fiercest critics, 2012 Republican nominee Mitt Romney – the man who refused to endorse Trump’s “bigotry” and “racist approach.”

The two men are set to meet this weekend to discuss “governing moving forward” and potentially a role for Romney in Trump’s Cabinet, the source said. The source declined to specify for which Cabinet positions Romney is under consideration.

As CNN notes, “the meeting is the latest in a series of Trump’s conversations and encounters with Republicans who did not support his candidacy in an effort to reunite the GOP following a divisive election that fractured party leaders past the Republican primary and into the general election.”

While we have no idea if CNN is merely trying to stir tensions with a fake “trial balloon”, where we agree with CNN is that “a Romney appointment would be a startling shift in the two men’s relationship.”

As a reminder, Trump, who endorsed Romney in 2012, repeatedly slammed the former GOP standard bearer during his ultimately bid for the a Republican nomination for his defeat to President Barack Obama, describing him in characteristically colorful terms as a failure. Romney returned fire, repeatedly and forcefully arguing that Trump was not qualified to serve as commander-in-chief. In a dramatic speech last March, before Trump clinched the Republican nomination, Romney slammed Trump as a “con man,” a “phony” and “a fraud.” Romney also refused to endorse Trump in the general election, and instead argued In favor of allowing the Libertarian nominee Gary Johnson onto the debate stage.

In a June interview with CNN’s Wolf Blitzer, Romney warned that Trump’s presidency could usher in “trickle-down racism.”

The first sign of a detente between the establishment politician and the New York billionaire emerged when Romney congratulated Trump on his victory, a call Trump tweeted was “very nice!”

It now appears that the two may be good friends once again.

CNN adds that Trump’s transition spokesmen also announced Thursday he will name members of the so-called “landing team” of transition officials to work with US officials at the departments of State, Defense Justice and the the National Security Council. Trump is also scheduled to meet with his transition team for two hours on Friday to discuss their progress and go over potential appointments, Trump spokesman Jason Miller said Thursday.

Earlier this morning,  Trump tweeted that “my transition team, which is working long hours and doing a fantastic job, will be seeing many great candidates today. #MAGA.”

My transition team, which is working long hours and doing a fantastic job, will be seeing many great candidates today. #MAGA

Miller declined Thursday to provide a timetable for cabinet appointments, stressing that the focus is on “getting it right,” rather than an “arbitrary timetable,” echoing the comments of senior Trump adviser Kellyanne Conway. “In the words of Vice President Biden just yesterday after meeting with Mr. Pence, nobody should expect the government to be formed overnight,” Conway said Thursday morning on MSNBC’s “Morning Joe.” “Nobody is in a rush to do the wrong thing.”

It was not immediately clear if the Trump transition team considers bringing Romney on board as a wrong thing.