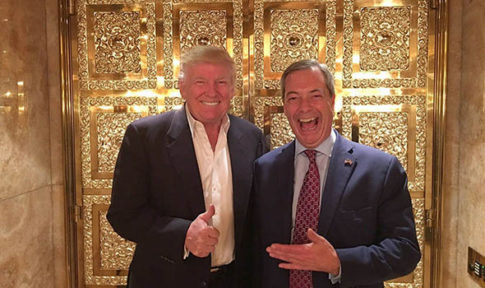 His comments come after outgoing President Barack Obama told the UK earlier this year that its decision to leave the EU meant it would be at the “back of the queue” for trade talks.

The Ukip leader described Donald Trump as an “anglophile” and said his re-installation of the Churchill statue was a clear sign of his appreciation for the historically warm relationship between the allies.

He said: “At the end of our time with Trump we asked him if the bust of Sir Winston Churchill that Obama had removed from the Oval Office could be put back in its rightful place. He enthusiastically thought that was a good idea. Need I say more?”

Nigel Farage played a key role in Mr Trump’s US election campaign, speaking at rallies and drumming up support, with Mr Trump referring to his shock election victory as “Brexit plus plus”.

The Leave campaigner blasted the British government for refusing to trust him after Downing Street issued a statement calling him an “irrelevance”.

He said: “If the president-elect trusts me then I would hope that some in the British Government could do the same thing. I would be very happy to provide introductions and to start the necessary process of mending fences. And I would not want anything in return. I hope in our national interest that some sense prevails on this.”

He went on to criticise the government for being “unrelentingly negative about The Donald”, which he said was the only difficuly point during their discussion, adding: “there are fences to be mended”.