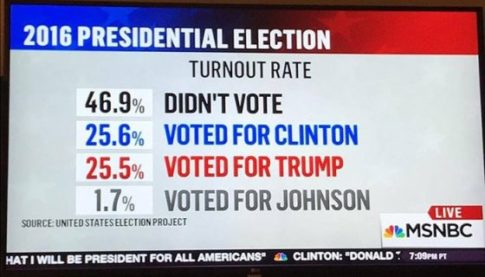 – Nearly Half of Eligible Voters Did Not Vote. At All:

Nearly half of all eligible voters did not vote, according to The United States Election Project. Out of 231,556,622 in the Voting-Eligible Population (VEP), there were only 131,018,000 ballots counted.

You tell me what happened

If you count minors and mentally handicapped people, a majority of people in this country effectively voted for no president. If there were anything remotely democratic about this system, we should not see any president elected at all.

Of course, this begs the question, what could possibly grant a person the so-called right to rule others?

1 thought on “Nearly Half of Eligible Voters Did Not Vote. At All.”