Mass, unvetted immigration from Africa, Asia and the Middle East is turning parts of Germany into no-go zones — lawless areas where the state has effectively lost control and where native Germans, including the police, increasingly fear to come.

German authorities steadfastly deny the existence of such areas, but confidential police reports, testimonies from police on the ground and anecdotal evidence from local citizens all confirm that parts of major German cities have descended into pockets of lawlessness where criminal migrants have usurped control of the streets from German police.

Observers say the problems are being exacerbated by the German government, which has relocated hundreds of thousands of asylum seekers and refugees into these areas.

The newspaper, Bild, and the newsmagazine, Focus, among others, have identified (here, here and here) more than 40 “problem areas” (Problemviertel) across Germany. These are areas where large concentrations of migrants, high levels of unemployment and chronic welfare dependency, combined with urban decay, have become incubators for anarchy.

The problem of no-go zones is especially acute in North Rhine-Westphalia (NRW), Germany’s most populous state. According to the Rheinische Post, NRW problem areas include:

In Duisburg, spiraling levels of violent crime perpetrated by migrants from the Middle East and the Balkans have turned parts of the city into de facto “no-go zones” for police, according to a confidential police report that was leaked to Der Spiegel.

The report, produced by NRW police headquarters, warns that the government is losing control over problem neighborhoods and that the ability of police to maintain public order “cannot be guaranteed over the long term.”

Duisburg, which has a total population of around 500,000, is home to an estimated 60,000 mostly Turkish Muslims, making it one of the most Islamized cities in Germany. In recent years, however, thousands of Bulgarians and Romanians (including Sinti and Roma “gypsies”) have flocked to Duisburg, creating a volatile ethno-religious cauldron.

According to Der Spiegel:

“There are districts where immigrant gangs are taking over entire streets for themselves. Native residents and business people are being intimidated and silenced. People taking trams during the evening and nighttime describe their experiences as ‘living nightmares.’ Policemen, and especially policewomen, are subject to ‘high levels of aggression and disrespect.’

“In the medium term, nothing will change. The reasons for this: the high rate of unemployment, the lack of job prospects for immigrants without qualifications for the German labor market and ethnic tensions among migrants….

“Experts have warned for some time that problem neighborhoods could become no-go areas. The president of the German Police Union, Rainer Wendt, told Spiegel Online years ago: ‘In Berlin or in the north of Duisburg there are neighborhoods where colleagues hardly dare to stop a car — because they know that they’ll be surrounded by 40 or 50 men.’ These attacks amount to a ‘deliberate challenge to the authority of the state — attacks in which the perpetrators are expressing their contempt for our society.'”

Duisburg’s Marxloh district, one of the most problematic in Germany, has been described as “a memorial to Germany’s failed integration policy.” More than half of the district’s 20,000 inhabitants are migrants. They come from than 90 different countries. More than half the residents in Marxloh live on welfare.

In a story entitled, “Duisburg-Marxloh: How a German Neighborhood Became a No-Go Zone,” N24 Television described the decline of the area:

“Once Duisburg-Marxloh was a popular shopping and residential area. Now clans claim the streets for themselves. The police are powerless. The descent of the district is nightmarish.

“Police will enter some parts of Marxloh only with reinforcements. Several patrol cars are needed to respond even to commonplace rear-end collisions. Too often, they are surrounded by an aggressive mob, spat upon and threatened. Last year, police were deployed to Marxloh more than 600 times with four or more patrol cars. This summer, the neighborhood descended even deeper into a spiral of violence. Family clans claim streets for themselves. Citizens hardly dare to go outside at night. In the smallest matter, violence is kindled.”

A leaked police report revealed that Marxloh’s streets are effectively controlled by Lebanese clans which do not recognize the authority of German police. They have taken over entire streets to carry out illegal business activity. New migrants from Bulgaria and Romania are adding to the problems. According to Die Welt, Marxloh’s streets serve as invisible boundaries between ethnic groups. Residents speak of “the Kurdish road” or “the Romanian road.”

Police say they are alarmed by the brutality and aggression of the clans, who are said to view crime as leisure activity. If police dare to intervene, hundreds of clan members are mobilized to confront the police. A local woman interviewed by Deutschlandfunk radio said she was afraid for her safety: “After dark I would not stand here because there are a lot of conflicts between foreigners, especially between Lebanese and Turks.”

The Rheinische Post recently published a photo series entitled, “On the streets of Marxloh by night.” A photo caption reads: “Normal citizens cannot be seen on the streets at night. Marxloh seems to have died out.” Another caption: “At night, Romanian residents dance on the streets, the sound system in the car supplies loud music.”

A 17-page report prepared for the NRW State Parliament revealed how Lebanese clans in Duisburg divide up certain neighborhoods in order to pursue their criminal activities, such as robbery, drug dealing and extortion. These groups do not recognize the authority of the police. Their members are males between the ages of 15 and 25 and “nearly 100%” of them are known to police. The prevailing offenses are physical assault, theft and robbery.

The report described the situation in Duisburg’s Laar district, where two large Lebanese families call the shots. “The streets are actually regarded as a separate territory. Outsiders are physically assaulted, robbed and harassed. Experience shows that the Lebanese clans “can mobilize several hundred people in a very short period of time by means of a telephone call.”

Peter Biesenbach of the opposition Christian Democrats (CDU) said: “If this is not a no-go area, then I do not know what is.” He has called for an official study to determine the true scope of the criminal clans in NRW.

NRW Interior Minister Ralf Jäger of the Social Democrats (SPD) rejected that request because such a study would be politically incorrect:

“Further data collection is not legally permissible. Both internally and externally, any classification that could be used to depreciate human beings must be avoided. In this respect, the use of the term ‘family clan’ is forbidden from the police point of view.”

In nearby Gelsenkirchen, Kurdish and Lebanese clans are vying for control of city streets, some of which have become lawless zones that are increasingly off limits to German authorities. In one incident, police were patrolling an area in the southern part of the city when they were suddenly surrounded and physically assaulted by more than 60 clan members.

In another incident, two police officers stopped a driver who ran a red light. The driver got out of the car and ran away. When police caught up with him, they were confronted by more than 50 migrants. A 15-year-old attacked a policeman from behind and began strangling him, rendering him unconscious. Massive amounts of police reinforcements and pepper spray were needed to restore order.

In a statement, Gelsenkirchen police warned: “Unfortunately, police officers and other emergency responders have increasingly been subject to hostility, insults and even violent attacks in Gelsenkirchen.”

Senior members of the Gelsenkirchen police recently held a secret meeting with representatives of three Arab clans in an effort to “cultivate social peace between Germans and Lebanese.” According to a police report about the meeting that was leaked to the local media, the clans informed Police Chief Ralf Feldmann that “the police cannot win a war with the Lebanese because we outnumber them.” The clan members added: “This applies to all of Gelsenkirchen, if we so choose.”

When Feldman countered that he would dispatch police reinforcements to disrupt their illegal activities, the clan members laughed in his face and said that “the government does not have enough money to deploy the numbers of police necessary to confront the Lebanese.” According to the police report, German authorities should not harbor any illusions about the actual balance of power: “The police would be defeated.”

Another leaked police report revealed that the clans are the “executive body of an existing parallel legal system to self-adjudicate matters between large Kurdish and Lebanese families in the western Ruhr area.” These clans “despise the police and German courts” and “settle their matters on their own terms.”

The Frankfurter Neue Presse, in an article entitled, “Neighborhoods in NRW: No-Go Areas and Parallel Societies,” reports that Kurdish, Lebanese and Romanian clans have divided up the Gelsenkirchen districts of Bismarck, Rotthausen and Ückendorf, and around the central station. In these areas, the clans “claim individual streets for themselves.” These are municipalities with a very high proportion of foreigners and migrants. Because of the exorbitant youth unemployment, these areas are pits of hopelessness and dread which the native German population has long since abandoned.

In an interview with Focus, Arnold Plickert, the head of the police union in North Rhine-Westphalia, warned of the emergence of no-go zones in Cologne, Dortmund, Duisburg and Essen. “Several rival rocker groups as well as Lebanese, Turkish, Romanian and Bulgarian clans are fighting for supremacy of the streets,” he said. “They make their own rules; here the police have nothing more to say.”

Speaking to Deutschlandradio Kultur, Plickert added: “Even with the smallest traffic accidents or ID checks, police are quickly surrounded by large groups of young men with a migration background. Bodily contact, insults and physical assaults are commonplace.”

On October 6, more than 400 residents of the Altenessen district in Essen met local politicians in a televised “town hall meeting” to discuss spiraling violence and crime in the area. Residents complained that police often refuse to respond to calls for help and begged city officials to restore order. One resident said: “I was born here and I do not feel safe anymore.”

City officials flatly rejected the complaints. Mayor Thomas Kufen said: “Altenessen is not a no-go area, the people here are just angry.” Police Chief Frank Richter added: “I am sick and tired of hearing about no-go zones in Essen.” He insisted that Essen und Altenessen are perfectly safe. 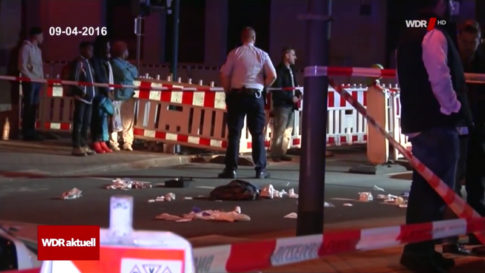 Police guard the scene of a shooting murder in Essen, Germany, on April 9, 2016. The murder was part of a bloody feud within a Lebanese clan. (Image source: WDR video screenshot)

In an interview with Der Westen, Osnabrück Police Commissioner Bernhard Witthaut was asked: “Are there urban areas — for example in the Ruhr — districts and housing blocks that are ‘no-go areas,’ meaning that they can no longer be secured by the police?” He replied:

“Every police commissioner and interior minister will deny it. But of course we know where we can go with the police car and where, even initially, only with the personnel carrier. The reason is that our colleagues can no longer feel safe there in twos, and have to fear becoming the victim of a crime themselves. We know that these areas exist. Even worse: in these areas, crimes no longer result in charges. They are left to themselves. Only in the worst cases do we in the police learn anything about it. The power of the state is completely out of the picture.”