The NWO closing in from all sides.

In a fiery address to the Indian nation, PM Narendra Modi just took a major step in the war on cash that is being waged worldwide. Talking tough on fighting corruption and the black market economy, Modi decreed that the INR500 ($7.50), and INR1000 ($15) bills will no longer be legal tender and that ATM withdrawals will be limited to INR2000 ($30) for some.

“Fake money and terrorism are ruining the nation’s fabric,”  Modi exclaimed, adding that “it was very important to keep this news under wrap. Due to this, RBI and post office have a major task ahead and RBI has also decided that all banks will be shut for the public on November 9.”

“Government is imposing a limit on high denomination notes. In the history of nations, such a moment comes when you realise that you must be part of this historical moment. This, is one such day. Every common man who is tired of corruption and black money is welcome to contribute to this catharsis. It is very important to cleanse the nation of the corruption.”

“Come, let’s all celebrate the festival of honesty”

India decided to abolish currency notes of 500 and 1,000 rupees denominations to fight rampant tax evasion and corruption, Prime Minister Narendra Modi said in a televised address to the nation.

The notes will no longer be legal tender from Nov. 8, and will have to deposited in banks by end of December, he said in a late evening message broadcast on major national television networks.

Some concessions will be allowed for use of the currency notes in government-run hospitals until Nov. 11.

The Rupee is rallying on the news… 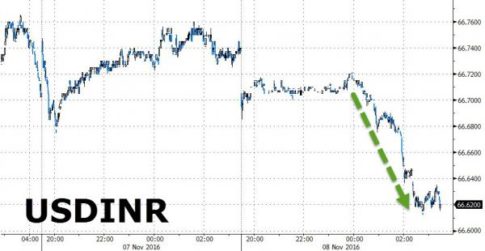 In Pics: New Rs 2000 Note that will be issued pic.twitter.com/4NXhNOpxxA

Somewhat shockingly, Modi further added that ID cards will be required to return money to banks.