“The manipulation of statistics is old hat, so it comes as no surprise to see tha third quarter figures for the US Economy have been creatively massaged.

Lies, disinformation, propaganda and pure unadulterated bullshit from those whose wages you pay to blindfold you.”

And speaking of “putting lipstick on a pig” … 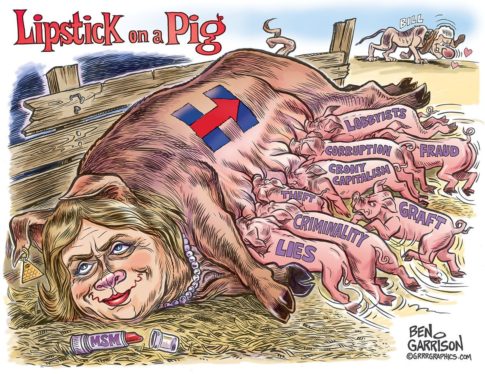 – Q3 GDP Report Was Literally Putting Lipstick On A Pig:

Since most everyone is focused on the upcoming US elections, many investors may not have had the time to peel back the onion on the third quarter US GDP report. So, if you just glanced at the headline GDP number of a 2.9% annualized growth rate, you may have concluded that the US economy was finally on its way to sustainable growth.

That 2.9% read was the biggest in the last two years…and it also beat the median forecast of 2.6%. However, to put that number in perspective, average GDP growth over the past four quarters was only 1.5%, and the average for first three-quarters of 2016 is just 1.7%.

So before you get out your party hats and declare this economic malaise over, there were a few notable concerns in that Q3 GDP report.

First off, consumer spending, which accounts for more than two-thirds of U.S. economic activity and just under 70% of GDP growth, fell significantly during the quarter to an annualized rate of 2.1%. That 2.1% is a little bit over half the level of spending posted in the previous quarter. Also, spending on durable goods fell three-fold from Q2 levels.

Third-quarter growth was also flattered by a buildup in business inventories, as re-stocking shelves added 0.61 percentage points to GDP.

And after flatlining in the second quarter, trade contributed an impressive 0.83 percentage points to GDP, as exports surged at a 10% rate.

Was the surge in exports a sign of a U.S. manufacturing renaissance? No. A surge in soybean shipments dispatched to meet the insatiable appetites of Chinese hogs helped to shrink the trade deficit this quarter, as bad weather destroyed crops in Argentina and Brazil (the world’s largest exporters) leaving U.S. soybean producers to fill the gap.

Taking out Communist China’s dictum to increase the hog herds, and that inventory build-up for a consumer who won’t show up due to soaring Obamacare premiums and the incipient recession, GDP growth would have been just 1.4%. Thus, confirming that the languishing growth rates we have grown accustomed to since the Great Recession are taking a further move down.

But if you believe the pundits that think GDP growth is about to accelerate on a worldwide basis, think again. The most import reason why global growth is about to turn even lower is borrowing costs have started to spike worldwide on that enormous mountain of record debt. This is because global central banks have come to a brief—but surely temporary–period of sanity, in their epiphany that there are negative ramifications to endless counterfeiting.

For the past three years, the Bank of Japan has embarked on an unprecedented bond-buying scheme to boost inflation towards 2%. The BOJ now owns more than half of all ETFs and 40% of all outstanding Japanese government bonds. But despite all that manipulation of markets, Japan’s central bank has now admitted it will not be able to reach its inflation target until the spring of 2019. The BOJ had originally thought it could achieve 2% inflation during 2015. Most importantly, Japan’s central bank has shifted its focus from achieving its inflation target, to just steepening the yield curve. The BOJ is now seeking to boost long-term borrowing costs rather than simply try to push the entire yield curve lower.

Koichi Hamada, an economic adviser to Japan’s Prime Minister Shinzo Abe, went on record saying that the BOJ is “at the end of the road.” Thus, admitting the BOJ has reached its monetary limit for now and that achieving 2% inflation was no longer its immediate mandate.

Likewise, the head of the European Central Bank, Mario Draghi, has admitted achieving 2% inflation will take several more years—conveying the ECB will also be patient in reaching its target.

And of course, the Federal Reserve ended QE in October of 2014 and is now threatening to raise interest rates for the second time in the last ten years come December 14th.

This change in central bank monetary strategy means that although global bond yields have yet to soar, it is also clear they are no longer falling. And perpetually falling interest rates has been the corner stone to this phony economic recovery.

Debt loving governments and inflation enamored central bankers have ironically been able to push yields to zero percent and under, so they were already as low as they can go. And now bankrupt sovereign governments–and the debt that they issue–are running smack into the next recession, which the money printers have nothing to offer other than to implement more QE. That is the road to economic chaos rather than viable GDP growth.