Having been the whipping boy of Republicans everywhere since July, following his announcement the FBI would not recommend charges against Hillary Clinton, then shockingly making the “most hated list” of every Democrat with the even more stunning news the FBI had reopened its probe of Hillary Clinton, bureau director James Comey just can’t seem to win.

So in an attempt to justify his actions, a “leaked” memo emerged on Friday evening courtesy of Fox News, which explains why Comey took the unusual step of deciding to inform Congress that the FBI had reopened its investigation into Clinton’s private email server. The memo reveals two main arguments: a sense of obligation to lawmakers and a concern that word of the new email discovery would leak to the media and raise questions of a coverup.

These two arguments prompted the FBI director to release his brief letter to Congress on Friday and has sent the presidential race into a tailspin less than two weeks before Election Day. It placed Comey again at the center of a highly partisan argument over whether the nation’s top law enforcement agency was unfairly influencing the campaign.

In a memo explaining his decision to FBI employees soon after he sent his letter to Congress, Comey said he felt “an obligation to do so given that I testified repeatedly in recent months that our investigation was completed.” He admitted that he broke with custom in alerting lawmakers that the investigation into Hillary Clinton’s private email server was being reopened because of its political sensitivity.

He further explained to FBI employees that “Of course we don’t ordinarily tell Congress about ongoing investigations, but here I feel an obligation to do so given that I testified repeatedly in recent months that our investigation was completed. I also think it would be misleading to the American people were we not to supplement the record.”

What made this case special in Comey’s eyes is that Clinton is seeking the White House in an election on Nov. 8. In other words, both internal pressure to preempt leaks (from disgruntled employees?) and a sense of “obligations” is why Hillary’s campaign is in full damage control mode right now.

“At the same time, however, given that we do not know the significance of this newly discovered collection of emails, I don’t want to create a misleading impression,” Comey’s letter continued. “In trying to strike that balance, in a brief letter, and in the middle of an election season, there is significant risk of being misunderstood, but I wanted you to hear directy from me about it.”

As reported previously, the bombshell revelation that newly discovered emails had prompted a new look into whether Clinton or those around her had broken the law my mishandling sensitive information rocked the race for the White House Friday. Comey informed eight Republican lawmakers that new emails had surfaced that were relevant to the investigation, and warranted a new look.

Comey announced in July that the FBI had wrapped up a year-long investigation into Clinton’s use of a private email server for official business and concluded that while she was “extremely careless,” he could not recommend that the Justice Department seek an indictment. The decision was blasted by Republicans, and FoxNews.com reported earlier this month that career DOJ and FBI workers were furious.

Now, it is the democrats turn to rage at Comey and the FBI, although Comey likely did not have much choice: had he kept the information secret, it certainly would have leaked as we predicted; as such his best recourse was to come clean, although many have speculated about the cryptic nature of the disclosure.

Needless to say, all Comey would need to do to regain the Demcorats’ trust and favor is to announce in just a few days that nothing material has been found and that the second probe is also over. 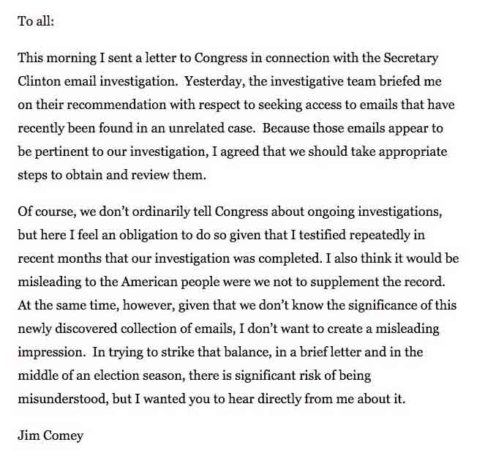