“New York City recognizes 31 gender identities. People have been *shamefully slow* to learn them all” 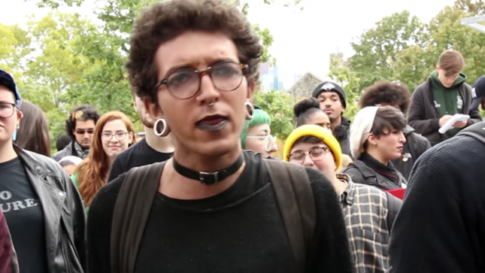 – Canadian gender-neutral pronoun bill is a warning for Americans:

Two weeks ago I posted three YouTube videos about legislative threats to Canadian freedom of speech. I singled out Canada’s Federal Bill C-16, which adds legal protection for “gender identity” and “gender expression” to the Canadian Human Rights Act and the Criminal code.

I noted that the policy statements surrounding similar legislation — most particularly those on the Ontario Human Rights Commission website — were dangerously vague and ill-formulated. I also indicated my refusal to apply what are now known as “preferred” pronouns to people who do not fit easily into traditional gender categories (although I am willing to call someone “he” or “she” in accordance with their manner of self-presentation).

These videos attracted a disproportionate amount of attention — online, in the Canadian national media, and beyond. A demonstration at the University of Toronto protested my statements. Another was held in support of free speech. The latter was met by counter-demonstrators who drowned out the speakers with white noise and assaulted a young female journalist — an act now viewed by half a million people on YouTube overall:

If you are wondering, reasonably, why any of this might be relevant to Americans, you might note that legislation very similar to Bill C-16 has already been passed in New York City.

Authorities there now fine citizens up to $250,000 for the novel crime of “mis-gendering” — referring to people by any words other than their pronouns of choice (including newly constructed words such as zie/hir, ey/em/eir and co).

“They” is also a popular choice, transforming the plural into a new singular, with its advocates arguing (misleadingly, in my opinion) that such use reaches back several hundred years. I have been taken to task for my refusal to abide by the wishes of those demanding such changes to my speech. What are my reasons?

First, most simply, are the practical problems. The Big Apple now legally protects a non-exhaustive list of 31 gender identities.

New York City recognizes 31 gender identities. People have been *shamefully slow* to learn them all https://t.co/zEv7bHAOOL

Facebook offers a choice of 58. Is that not the instant reductio ad absurdum of the gender extremists’ claims? Are the denizens of New York now legally required to employ a new pronoun for each of these many identities? How are they supposed to keep track of who’s who? And who is going to distinguish between mistakes and criminal action or intent?

It also turns out that pronouns are not so easy to change — particularly by fiat — because they are part of a “closed linguistic category” resistant to alteration.

Second, more complexly, are the political issues. “Gender-neutral” pronouns are, in my opinion, part of the “PC Game.” Here’s how you play:

Second, you note the inevitable continuum of success. Some people are richer or happier than others. Some children are better at playing volleyball.

Fourth, and finally, you declare solidarity with the latter, and enmity for the former (now all-too-convenient targets for your resentment and hatred).

You have now established your moral superiority, cost-free, and can trumpet it at will.

Words such as zie and hir, are, in my opinion, moves in the PC game. It’s not a game I wish to play. We shouldn’t reduce complex, uncertain issues to a one-size-fits-all formula. Instead, we should think things through carefully, using words of our own choice. It’s a free speech issue, in its essence.

People often defend freedom of speech on the grounds that citizens must retain the right to criticize their leaders. That’s true, but it’s not the fundamental truth.

There is nothing in the absence of freedom of speech but tyranny and slavery.

To identify problems, solve them, and reach consensus, we have to do it foolishly. We have to mis-speak, and over-react, and engage badly in intense verbal conflict. We have to be tested and corrected by others. All of that requires legal protection.

People become upset by differences of opinion, and want them suppressed. And it’s no wonder. But the alternative is worse.

Without free speech, we cannot explore our ever-transforming territories, orient ourselves, and get to the point. Without freedom of speech, we will not talk — and we will not think. And then we will have real conflict, with all of its horrors, instead of its abstracted equivalent.

Some trans activists and I start a conversation: https://t.co/yPSEH5FzHF

Bill C-16, and its legislative sisters, are particularly insidious constructions.

Free speech is so fundamentally important that restricting it in any manner carries serious risk. Nonetheless, we shouldn’t be allowed to yell “fire” in a crowded theatre. Sensible people can also debate the control of hatred (although hate speech laws present a significant danger themselves).

There is, however, a crucial difference between laws that stop people from saying arguably dangerous words and laws that mandate the use of politically-approved words and phrases. We have never had laws of the latter sort before, not in our countries. This is no time to start.

So, a note from a Canadian friend. The citizens of your great country, and ours — and of our allies across the Western world — are at risk.

Careless, ideologically-addled legislators are forcing us to use words we did not freely choose. We have to draw a line in the sand. That’s why people are watching. It’s a vitally important issue. We cannot afford to get it wrong.

Peterson is a professor of psychology at the University of Toronto and a clinical psychologist. He is the author of Maps of Meaning: The Architecture of Belief, a study of religious thinking and its corruption by rational ideology. His YouTube lectures about that book and about personality have been viewed over a million times. He is also a co-developer of the Future Authoring program, an online writing exercise that has helped thousands of university students stay enrolled and improve their grades.