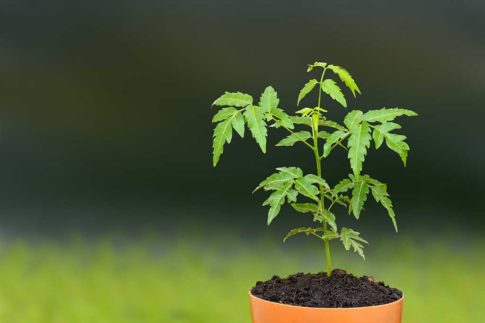 The ancient Neem tree of Asia has been the source of natural medicinal extracts for thousands of years. Indian history documents farmers having purposefully tended to and harvested Neem trees for their beneficial uses as far back as the Vedic period, 1500-600 B.C. Until recent history, the Neem has been used internally and externally in the traditional Ayurvedic herbal healing treatments in India. The last half century has seen the expansion of this herbal product into other parts of the world where European and American scientists have begun studies on the potential medical benefits of Neem.

With a history that spans from the beginning of Hinduism through the modern era, the Neem tree has proven itself to be a valuable herbal aid for daily living and for the support of ailments and irritants. As more studies are done with positive results and more people learn about Neem, its uses will become more a part of many individuals’ daily health regiments.

The Neem tree is a member of the Mahogany family Meliaceae and presents a close similarity to the Chinaberry tree. The Latin name for the Neem is Azadirachta indica, but it is also commonly referred to as Nimtree and Indian Lilac. The Neem tree is native to the countries of Asia, primarily in India, Burma, Bangladesh, and Pakistan. In India, the Neem tree is affectionately called Nature’s Drugstore since all parts of the tree are used in various forms for herbal healing. The Neem is a hardy evergreen tree that can survive in drought conditions by shedding most of its leaves, but it rebounds quickly to its lush green appearance as moist soil returns.

Asian populations use Neem leaf powder, Neem leaf oil, Neem pulp and seed oil, Neem tree bark and small Neem twigs for a wide array of medicinal and cosmetic purposes. The leaf powder and oil, mixed in either an aloe or vegetable base, is used topically in lotion, cream, and salve formats to treat skin ailments, to maintain smooth complexions and to moisturize the hands and body. The lotions and creams containing Neem seed oil can be used all over the body for dry or itchy skin and dermatitis.

Leaf oil shampoo is used for shiny hair and in the making of body wash and bars of soap to reduce skin irritations from harsh weather. Liquid Neem seed oil is also used in shampoo form for scalp conditions such as psoriasis and lice.

Neem leaf powder in vegetable capsules is taken as an herbal supplement to support the immune system and as part of a regime to support healthy blood sugar levels. Neem powder tea is used for antibiotic and antiviral treatments.

Slender Neem tree twigs are used in Asia as toothbrushes. It is believed that the healing powers from the tree support good dental hygiene and aid in preventing gingivitis and periodontal diseases. Neem leaf extract is also used in the manufacturing of toothpastes.

Clinical scientific studies on the potential medical benefits of Neem have recently begun in America. There have been several tests related to the treatment of gastric secretion and gastric duodenal ulcers with Neem bark extracts at the National Institute of Health in Bethesda, Maryland. One study in particular concluded with positive results for the use of Neem bark extract to reduce or completely heal acid reflux and gastric ulcers.

In this study patients with acid related problems and ulcers were treated twice daily for 10 days with 30 mg of aqueous Neem bark extract. After 10 days, there was a major decrease in gastric acid secretion and all the blood tests for any toxicity remained at or near to positive control values. Duodenal ulcers were significantly improved at an increased dosage of 30-60 mg. taken twice daily for 10 weeks. Additionally, one participant’s esophageal ulcer and one participant’s gastric ulcer were completely healed as a result of being treated twice daily for 6 weeks with 30 mg. of the bark extract.