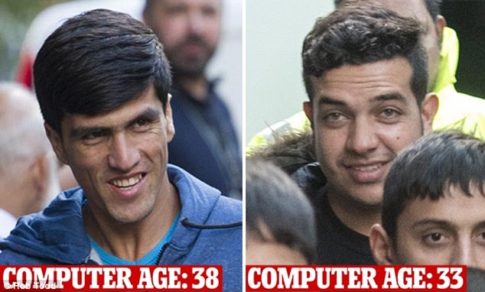 – Foster mother tells of horror when she discovered ’12-year-old Afghan refugee orphan’ she cared for was a 21-year-old jihadi:

A woman opened her heart and her door to a 12-year-old boy who had fled the horrors of war in Afghanistan after losing his parents – or so she thought.

In reality, not only was the boy in her care, Jamal, almost a decade older than she had been duped into believing, but he also had Taliban and child abuse material on his phone.

A dentist’s check found his age to actually be around 21 and a subsequent investigation uncovered the shocking content on his mobile, according to the Sun.

However, the news did not come as a huge surprise to his foster mother, who gave her name only as Rosie, who had not only been extremely suspicious of his developed facial hair – which led to him being thrown off a bus as he looked too old for a child ticket – but also other characteristics.

She took Jamal to a climbing centre, where he displayed upper body strength far beyond his supposed years and also was able to completely strip a rifle at a shooting range.

While in her care, he shared a room with three children aged between 12 and 14.

Rosie told the paper’s Nigel Bunyan and Chris Pollard: ‘It’s ridiculous how everybody else could see it but not the social workers.’

Although she could not confirm if he was a terrorist, she was adamant he had spent time in a training camp.

She added that his last words to her were ‘I’ll kill you and I know where your children are.’

Jamal has since reportedly been turned down for asylum after being arrested for assault.

It follows fierce criticism of ‘children’ being allowed into Britain ahead of the demolition of the Calais jungle appearing to be well into adulthood.

Refugees, who the Government claims are aged 14 to 17, arrived at the UK Visas and Immigration office in Croydon, south London, by coach as part of a fast-track system to move youngsters from the French migrant camp.

After photographs of the refugees arriving were published, Conservative MP David Davies wrote on Twitter: ‘These don’t look like ‘children’ to me. I hope British hospitality is not being abused.’

Officials insist the migrants have undergone rigorous interviews and document checks to establish they are aged under 18.