– Indonesia: Muslim smiles and screams “Allahu akbar” as he gets 10-year sentence for jihad massacre:

“Suridi showed no remorse in the court room.”

Why should he? He believes he has done a great deed for Allah, and will be rewarded in Paradise. 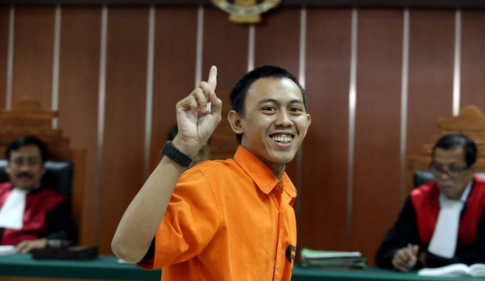 “Militant smiles and praises Allah after being sentenced to 10 years for Jakarta terror attack,” Associated Press, October 20, 2016 (thanks to The Religion of Peace):

An Indonesian court on Thursday sentenced an Islamic militant to 10 years in prison for his involvement in a suicide bombing and gun attack in the capital Jakarta earlier this year.

Dodi Suridi, 23, was captured a day after the January 14 attack that killed eight people including four militants, who police said claimed allegiance to the Islamic State group.

Judge Achmad Fauzi, who presided over the trial at the West Jakarta District Court, said Suridi was guilty of violating Indonesia’s anti-terror law by supplying materials used to prepare bombs that were used in the attack.

A second IS supporter, 48-year-old Ali Hamka, was also jailed for four years over the attack for trying to find guns and ammunition to use in the assault.

About 40 militants have been arrested in connection with the attack that began with a suicide bombing inside a Starbucks cafe.

Suridi knew a suicide bombing would take place but did not know when and where, according to Fauzi. He also participated in meetings aimed at recruiting suicide bombers.

Suridi showed no remorse in the court room. He said he would not appeal and called his sentence the “risk of being a terrorist”.

As court officials led him away, he yelled “Allahu akbar [God is great]” and flashed a smile at journalists….