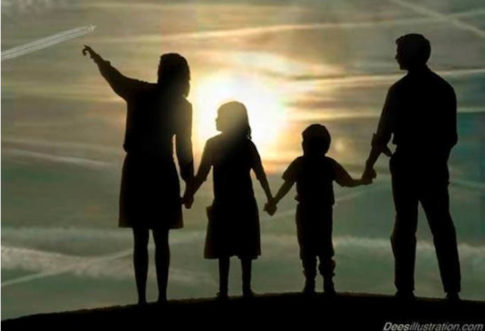 – Global Air Quality UNFIT Per the WHO — Are Chemtrails to Blame?:

The World Health Organization (WHO) published that confirmation of air quality in a press release issued September 2, 2016.  Heck, I could have told them that years ago without performing any studies or quality models just from looking at skies overhead and seeing ‘sky graffiti’ that spreads out into ‘blanket clouds’, which make sunny days dark, dreary and dreadful of what’s falling to earth—the  particulates we humans are forced to breathe.

Question:  Do the ‘clouds’ in these photos look like anything Mother Nature would provide? 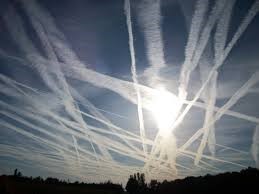 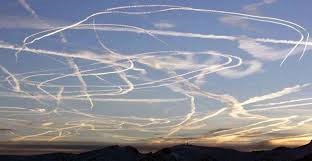 Furthermore, what kind of ‘flight plans’ do those chemtrails represent?  Even a Kamikaze pilot could do much better, I think.

Isn’t it common horse sense to question what’s in those ‘trails in the sky’, since normal contrails dissipate within seconds?  Furthermore, modern jet engines are not supposed to produce contrails except in extreme conditions!  Something downright nefarious obviously is going on and it’s affecting air quality, regardless of what the WHO or climate geoengineers deny about “chemtrails.”

What is air pollution’s toll on humans?

According to the WHO,

So why, then, are global governments and corporations [6] engaging in Solar Radiation Management (SRM) and other weather geoengineering practices that absolutely contaminate the air that all forms of life on Planet Earth are forced to breathe?

If anyone doubts that’s a reality, well, here is some pretty powerful documentation:

Manipulating weather is not some two-bit endeavor: Numerous ‘resources’ obviously become engaged and deployed, the least of which are chemicals, gases, machinery and technology.  Someone has to foot the bill for that and ‘underwrite it’ too!

Do you think the WHO knows?

How about the U.S. Congress; does it know and if not, why not, and when will it find out?

That WHO press release mentioned above has the chutzpah to blame poor air quality on,

So they concocted a ‘sensible-sounding’ reasoning, including creating a surreal reality, for pushing their infamous “carbon taxes.” [2,3]  However, the WHO and weather geoengineers deliberately omit the number one air quality pollutants—those doggone ubiquitous chemtrails that contain toxic chemicals, aluminum chaff, biologicals and ‘unknowns’ used in “Stratospheric Aerosol Geoengineering.”

According to Global Research’s “Chemtrails: The Consequences of Toxic Metals and Chemical Aerosols on Human Health,”

Over the past decade, independent testing of Chemtrails around the country has shown a dangerous, extremely poisonous brew that includes: barium, nano aluminum-coated fiberglass [known as CHAFF], radioactive thorium, cadmium, chromium, nickel, desiccated blood, mold spores, yellow fungal mycotoxins, ethylene dibromide, and polymer fibers. Barium can be compared to the toxicity of arsenic.(4) Barium is known to adversely affect the heart. Aluminum has a history of damaging brain function. Independent researchers and labs continue to show off-the-scale levels of these poisons. A few “anonymous” officials have acknowledged this on-going aerosol spraying.(5) [4]

I’d say the above information sure sounds like an incredible roster—plus tonnage—of toxins being sprayed into the atmosphere, which creates the air pollution we breathe in a much greater proportion than what the WHO wants to blame it on: transportation modes, household fuel, waste burning, coal-fired plants and industrial activities, even though those ‘offenders’ provide a tremendous amount of air pollution.  However, why deliberately spray more toxic clouds and pollution on humans like we are some sort of roaches to be gotten rid of?

Fine particulate matter pollutants, which are less than PM2.5, is being set as the “standard” for acceptable air quality by the WHO.  However, take a read on this:

PM2.5 includes pollutants such as sulfate, nitrates and black carbon, which penetrate deep into the lungs and in the cardiovascular system, posing the greatest risks to human health.

Incidentally, the WHO has another website, “BREATHE LIFE” [5], which states “air pollution is an invisible killer,” so why, in the name of all that is common sense, isn’t the WHO doing something about stopping chemtrails?  Good question?  Or, are they playing some sort of shell mind games with us about air pollution to fit in with some specific agenda?

List of Geoengineering Experiments and Who Funds Them
http://www.thetruthdenied.com/news/2015/06/26/list-of-geoengineering-experiments-and-who-funds-them/

1 thought on “Global Air Quality UNFIT Per the WHO — Are Chemtrails to Blame?”