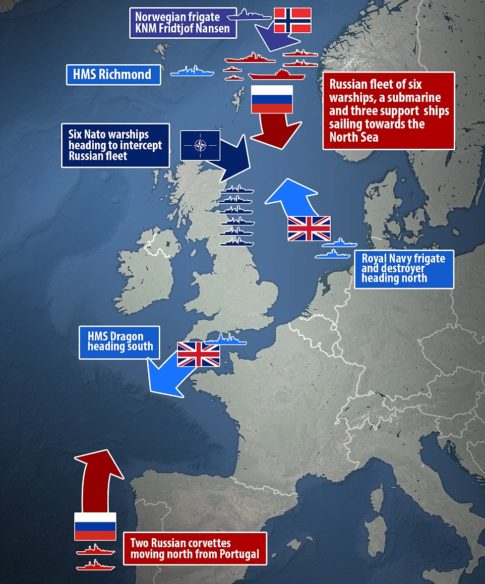 – The Russians ARE coming! Putin’s armed fleet heads for Dover as Moscow moves ships from the Med to square up to Royal Navy vessels in ‘Operation Sea Fist’:

The Russian aircraft carrier fleet is on its way to pass through the English Channel on its way to join Bashar al-Assad’s bombing campaign in Syrian city Aleppo, the Ministry of Defence has confirmed.

The eight-strong flotilla, led by the Admiral Kuzentsov, has completed training its pilots for bombing missions while it has been tracked by the Royal Navy’s HMS Richmond and several NATO vessels.

And Vladimir Putin’s admirals are keen to ramp up the pressure on Britain’s warships by calling in extra assets from the Mediterranean in a mission dubbed ‘Operation Sea Fist’ by the Russian media.

A MOD spokesman said: ‘It is pretty unambiguous that they have set a course to pass through the Dover Strait.’

The Russians are trying to divide the Royal Navy’s efforts to track their fleet by recalling two corvettes from the Mediterranean, forcing the HMS Dragon to head south from Portsmouth to intercept.

It is understood there is also a Dutch submarine operating south of the English Channel.

1 thought on “The Russians ARE coming! Putin’s armed fleet heads for Dover as Moscow moves ships from the Med to square up to Royal Navy vessels in ‘Operation Sea Fist’”