– What Happens When The Electricity Is Off For Three Days?:

What happens when an electricity dependent society and economy has an extended loss of electrical grid and communications?

One of the hidden realities of modern life is its fragility. For example, few people are aware of the precariousness of the supply chain that refills gasoline/petrol stations around the world every few days.

A new book, When Trucks Stop Running: Energy and the Future of Transportation explores the fragilities of our truck-dependent supply chains.

Longtime correspondent Bart D. (Australia) recently experienced a multi-day regional loss of electricity. His first-person observations help us understand what breakdowns in energy are like on the ground.

Observations of life in an extended power failure by Bart D. (Australia)

South Oz is continuing with its streak of extreme weather. The latest being our encounter with what’s being described as a category 2 ‘hurricane’ with the added bonus of a severe front preceding it that produced many low-grade tornados. A score of major power transmission towers were twisted off their footings, 80 000 lightning strikes fried out a lot of ‘secondary’ electricity infrastructure … 40% of power that is usually being generated from wind had to be shut down due to extreme winds and base load backup generators failed in many locations (including my region).

It was a fascinating opportunity to observe firsthand what happens when an electricity dependent society and economy has an extended and complete loss of electrical grid and communications.

Key observations for my local area are:

1. Many people have small petrol generators thanks to our lovely coastal wilderness and a preoccupation with Glamping (Glam Camping)

2. Very few people had a store of petrol at home more than 5 to 10 litres. (usually kept for use in lawn mowers, brush cutters, chainsaws). Some owners of small boats had up to 20 litres on hand.

3. When the electricity goes out … the pumps at fuel stations don’t work. To my great surprise, only 1 fuel station in my nearest city of about 14 000 population had (or quickly acquired) a back-up generator to work their fuel pumps. There was a 3 hour wait for customers to get from back of queue to the pumps … and a ridiculous show of ‘bulk buying’ where people didn’t just take fuel that they personally needed; they showed up with between 3 and 8 X 20 litre (5 gallon) fuel cans as well as filling their cars. Hopefully the canned fuel was distributed among family and friends. (My assertion is that the owners of the station should have rationed fuel to 40 litres per customer to keep the que moving faster and to make sure everyone had some, rather than creating an ‘all or nothing’ situation)

4. Due to the difficulty with getting hold of petrol after the blackout started … almost everyone with generators at home could only run them for a few hours over the course of the entire blackout. Even then, the small camping gensets usually lacked the capacity to run large modern refrigerator/freezers. So … most people lost the contents of their fridges by the end. Due to cold weather, at least freezers stayed cold for the most part.

5. Big shops had their own gensets … but they can’t power the banks of chillers for meat and dairy … so these items became unavailable by the evening of the blackout starting.

6. The full loss of grid, grid back-up and other smaller backups caused telecommunications and data transmission to practically cease. This meant limitations of EFTPOS in stores. Banks were shut, ATM’s didn’t work and some shops that were open could only take cash. Generally though, everyone muddled through the sketchy electronic payment systems one way or another. Internet access failed for the most part. Social media pretty much collapsed … my two daughters though their social lives were over. I didn’t miss it. My wife found more time to do other things too.

7. The items that disappeared from the shelves fast, and were tricky to find after 24 hours without power were : Bread, D cell batteries, 6 volt square batteries, matches, heat beads, butane gas cans, fresh meat, sandwich meats, cheeses. (not sure about bottled water – most here have rain tanks anyway). Everything else seemed fine, although fresh fruit and veg got limited after 48 hours.

8. In hardware/camping stores that managed to open: bottled LPG quickly sold out as did BBQ’s, camp stoves, camp lights and batteries to run them. Most here have a gas BBQ at home, but if you didn’t already have a full bottle of gas … it was very hard to get a replacement after 48 hours.

9. No one here knows how to use a road intersection properly when the traffic lights are out! I think this helped create major gridlock in the states capital but was even noticeable here at my much smaller regional city with just one such intersection containing lights. (public education urgently required on this)

10. The number of back-up gensets at critical locations (including hospitals and communications systems) that failed was disturbing. There needs to be a major inquiry into why the back-ups on critical services failed. This nearly caused a shutdown of mains water supply as our water is pumped out of aquifers and has to be lifted to storage tanks high up in the hills. More of a problem for sanitation than drinking, as rain tanks are common here.

11. Then there were a few people like me … I ran my big ‘workshop’ genset 7 hours a day (hour in the morning, hour at lunch time, 4-5 hours in the evening) and was burning about 7 litres of fuel a day in doing so. My home fuel reserve meant I could run at that extravagant level for a month if need be, or supply others who fell short. We ran refrigerators, lights and TV almost ‘as usual’ and offered to charge anyone’s batteries who needed it and supplied a small camping gas burner, full cylinder of gas and a good battery powered camping light to my parents-in-law who were seriously underprepared. The rest of my small home town (located 20km from a regional city) was rather dark and quiet for the three nights (in part due to the lack of pre-stored fuel to run camping gensets).

12. We have a gas stove in our kitchen, with bottled LNG that lasts 3 -5 months in normal use, so cooking was as normal for us. Since we didn’t try to use the gas to also heat washing/bathing water it would have lasted for the usual amount of time.

13. When most were having cold showers, no showers, wasting their BBQ gas to heat pots of water or crowding into friends and relations who had LNG hot water systems in their houses … our family had hot baths by candle light in huge volumes of wood heated water. (Picture of my old wood heater below.) It is very efficient, made in the 1940’s I think, but possibly much older. The inner bowl is copper and absorbs heat from a small fire lit behind the square opening in front. It can boil 70 litres in 20 minutes from a cold start, or 15 minutes for a refill of water once it’s already been going a while. 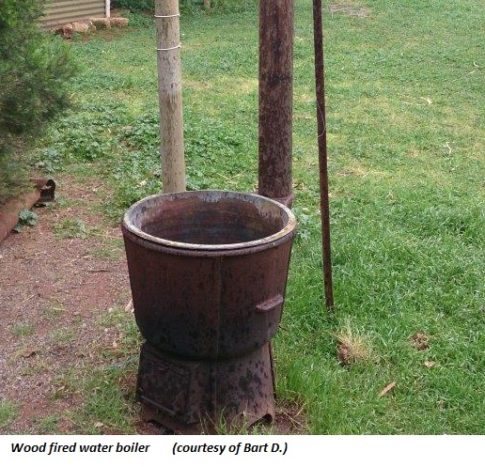 14. Apart from the fuel distribution fiasco everything remained orderly, people remained calm and helpful and life went on. Strangers were a lot chattier with other strangers than usual … which is good to see. I saw examples of shops extending ‘unsecured credit’ for small amounts of basic food items to people who had no cash on them and whose cards didn’t work. No looting, no “Law Enforcement” out making trouble and plenty of sharing and cooperation.

15. Although about a quarter of houses have solar panels or solar thermal hot water where I live … none of it worked as it’s all grid connect AND doesn’t work under the heavy cloud/rain/cold of a 3 day storm.

I’ve been thinking about getting ‘stand-alone’ solar power (ie connected to my own batteries) since they closed the big coal fired station in the north of my region, (and the price of these systems has become quite affordable). Our region is at ‘the end of the line’ of our state grid now and I expect regular outages this summer when hot, calm conditions prevail that reduce our wind generation output at the same time as spiking power use for air conditioners. Our electricity now has to travel up to 1600km (1000 miles) from the state of Victoria to reach us when the windmills aren’t working here!

Thank you, Bart, for sharing your observations. The resilience (or lack thereof) of complex systems is difficult to assess until there are atypical strains placed on the system.

What seems effortlessly resilient on average days can break down dramatically if redundancies, proper maintenance and crisis response have been stripped from the system by incompetence, budget cuts and/or the self-serving priorities of managers and employees.

As a result, we only discover systems have become fragile and brittle in crisis, when it’s too late to restore resilience. 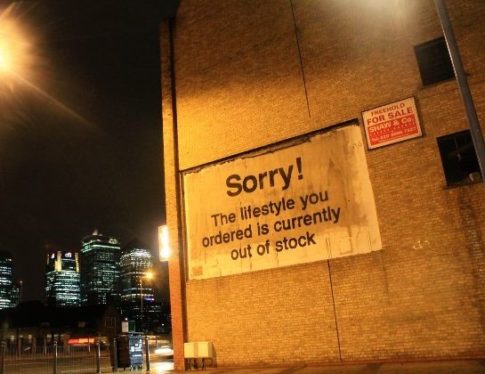 2 thoughts on “What Happens When The Electricity Is Off For Three Days?”