Just when you thought the shock value of Trump may have peaked when the Republican candidate brought with him some of the most prominent sexual accusers of Bill Clinton to the second debate, he has once again outdone himself, and as the NY Post reports, President Obama’s half-brother will attend Wednesday night’s presidential debate in Las Vegas as Trump’s guest.

“I’m excited to be at the debate. Trump can make America great again,” Malik Obama, the president’s sibling on his father’s side and fan of Donald Trump’s, told the Post. 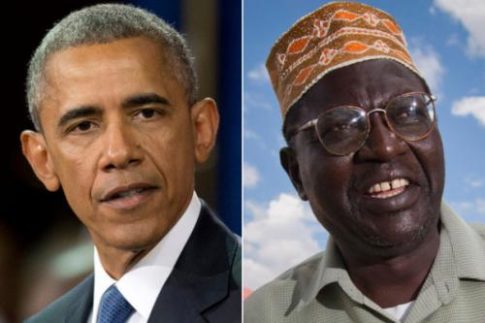 The 58-year-old is a U.S. citizen and splits his time between his home country of Kenya and Washington, D.C., where he has lived since 1985. “I look very much forward to meeting and being with Malik,” Trump told the Post. “He gets it far better than his brother.”

Malik agrees with Trump that the mainstream media is biased, and he dismisses the women who claim Trump kissed or groped them without their permission. “I don’t believe them,” Malik said. “Why didn’t they come forward before?”

Malik, who is three years older than Barack, said he last saw his sibling in August 2015 after the president had visited Kenya. “I went to the White House to say hello. I paid a courtesy call,” he said. But it wasn’t a very warm and loving reception. “As usual, it was a hands-off kind of thing, very businesslike, very formal,” Malik said.

Trump also invited the mother of a Benghazi victim to be his guest at the debate.  Pat Smith, mother of the late State Department employee Sean Smith, is a vocal critic of Hillary Clinton who blames the Democratic presidential nominee for the death of her son.

And in other news, Trump, perhaps sensing that according to the polls it is time of a Hail Mary pass, called for term limits in Congress as part of his new ethics reform proposal and also said he would institute a lobbying ban for government officials, two programs that would likely be met with significant grassroot-level support. The proposals were part of a five-point ethics plan revealed on Monday night in an effort to “drain the swamp” in Washington.

“If I’m elected president I will push for a constitutional amendment to impose term limits on all members of Congress,” Trump said at a rally in Colorado Springs, Colo. “Decades of failure in Washington and decades of special-interest dealing must and will come to an end.”

“Not only will it end our government corruption, but we will end the economic stagnation that we’re in right now — no growth,” Trump said.

Trump said he also wants Congress to pass a law preventing all administration officials, lawmakers and congressional aides from lobbying the government for five years after leaving public service.

His plan additionally includes a call for Congress to pass legislation banning registered foreign agents from raising money in U.S. elections. Trump promised as part of the plan to close loopholes that allow former government officials to call “themselves consultants and advisers when we all know they are lobbyists.”

Sadly, for this proposal to pass, it would need not only to change the constitution, but to obtain the support of two-thirds of Congress and three-fifths of America’s states, two events which are very much unlikely to happen. Still, for an American public which is thoroughly disgusted with the cronyism and corruption of the US political system, Trump’s proposal may be just what what it needed to hear to provide him with some much needed last minute support.