“Just wondering how much longer the Rothschilds can keep it afloat.” 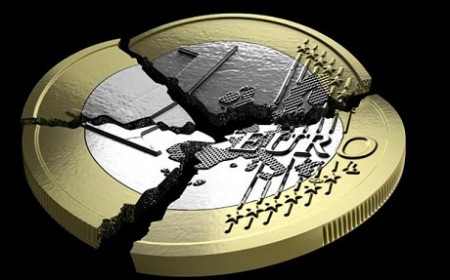 – Euro “Will Collapse” As Is “House of Cards” Warns Architect of Euro:

The Euro “will collapse” as it is a”house of cards” warned Otmar Issing, the founder and creator of the euro in an extraordinary interview on Monday.

In the explosive interview with the journal Central Banking, Professor Issing, said “one day, the house of cards will collapse”  as the European Central Bank (ECB) is becoming dangerously over-extended and the whole euro project is unworkable in its current form.

The founding architect of the monetary union has warned that Brussels’ dream of a European superstate will finally be buried amongst the rubble of the crumbling single currency he designed.

“Realistically, it will be a case of muddling through, struggling from one crisis to the next. It is difficult to forecast how long this will continue for, but it cannot go on endlessly,” he told the journal Central Banking in a remarkable deconstruction of the EU project.

The respected economist launched a withering attack on so called eurocrats and German Prime Minister Angela Merkel, accusing them of betraying the principles of the euro and demonstrating scandalous incompetence over its management.

And he savaged the whole idea of a federal “United States of Europe”, saying the attempt to push through federalisation in a stealth manner “by the back door” has turned the very foundations that the currency was built on into a complete mess of patchwork legislation, into which it is sinking fast.

As is frequently the case when there is substantive damaging criticism about the EU and ECB from respected and authoritative sources, the interview was treated in quite an Orwellian manner. It completely ignored and not reported by most state run media in Ireland, the UK and EU.  Most state run media is overwhelmingly pro-EU and continues to ignore the serious problems and growing risks posed by the single currency and the undemocratic EU to the citizens of Europe. Nor was it reported in most corporate media in the EU which also tends to ignore all reasonable criticisms of the EU, ECB and especially the euro.

The explosive interview has been covered extensively in the more “right wing” euro “skeptic” media in the UK in papers such as The Telegraph and The Mail which means that most people in the EU will not even be aware of Otmar Issing’s very real and reasonable concerns and the growing risks posed to the currency they use in their lives every day and their very way of life.

The euro has even greater challenges than sterling which has collapsed more than 43% against gold this year. It is only a matter of time before market participants and foreign exchange traders’ focus, moves from sterling to the ‘not so single’ euro. Then the euro will see a similar depreciation and devaluation in the coming months.

Gold will again fulfill its primary role which is as a hedge against currency devaluation. As it has done in the UK and many other nations in recent months and indeed has done throughout history.

1 thought on “Euro “Will Collapse” As Is “House of Cards” Warns Architect of Euro:”