– Wikileaks Provides An Update On The Assange Internet Outage:

It seems that the Obama administration’s efforts to save the presidential candidacy of Hillary Clinton is finally starting to yield tangible results as WikiLeaks just provided the following update that Julian Assange was cut off from using the Internet at the Ecuadorian embassy in London effective Saturday evening.

Clearly the lack of internet for Assange hasn’t slowed the release of Hillary’s emails as Part 9 of the Podesta emails were released yesterday and Part 10 was just released a few hours ago.

Of course, this comes just a few days after the Obama administration announced overt plans to escalate a cyber war with Russia over allegations they were behind the hacking of Hillary’s private email server.

Certainly, one has to wonder what this means for the future of Assange as clearly the Obama administration has applied sufficient pressure on the Ecuadorian government such that they have started to cave on their support of him.  Perhaps we should be checking flight logs for mysterious planes landing in Quito with billions of Swiss Francs on board.

Or perhaps, the Ecuadorian goverment prefers to “swap gold” with Hillary’s other political ally, Goldman Sachs, as Bloomberg noted they did back in 2014.  Just another of the many ways that Hillary’s wall street relationships have paid dividends…quid pro quo, Goldman.

Ecuador, one of only eight countries to adopt the U.S. dollar as its official currency, swapped gold with Goldman Sachs Group Inc. for liquid assets in a sign the nation is short on cash, according to Loomis Sayles & Co.

“It does raise a red flag,” Bianca Taylor, a sovereign analyst who helps oversee $210 billion at Loomis Sayles, said yesterday in a phone interview from Boston. “Whenever a country needs to sell or monetize its gold reserves, it’s definitely a signal that the sovereign is strapped for cash.”

President Rafael Correa is stepping up his search for financing at home and abroad after borrowing more than $11 billion from China since defaulting on $3.2 billion of foreign debt five years ago. Ecuador’s use of the dollar means it can’t finance deficits by printing money like other countries. Correa, a self-described revolutionary socialist, is now planning to raise about $700 million in an overseas bond sale this year and agreed to allow the International Monetary Fund to perform an economic review for the first time since 2008.

Ecuador’s central bank, stripped of its autonomy in a constitutional referendum a year after Correa took power in 2007, says it “invested” the gold with Goldman Sachs in return for assets that can be liquidated within seven days. The country will get the same quantity of gold back three years from now and expects to earn a profit of $16 million to $20 million from the deal, it said.

Below is what we recently wrote regarding the Obama administration’s stepped up efforts targeting Russia and Assange.

In what is looking more and more like a season finale of the HBO series “House of Cards” with each passing day, the Obama administration is now literally threatening a cyber war with Russia over allegations it was behind the hacking of Clinton’s emails.  According to an exclusive NBC report, the Obama administration “is contemplating an unprecedented cyber covert action” (though it’s unclear how exactly it’s covert if Biden is announcing it to the world via an interview with Chuck Todd)  against Russia, in “retaliation for alleged” interference in the American presidential election, and has asked the CIA to draft plans for a “wide-ranging “clandestine” cyber operation designed to harass and “embarrass” the Kremlin leadership.”

So now the Obama administration is overtly leveraging the full power of the United States to intimidate foreign governments, and most likely Julian Assange, in order to maintain control of the Executive Branch of the government.  Does anyone within the mainstream media see any problems with this?  Certainly Chuck Todd and NBC do not.  And notice that even the NBC article refers to “alleged” Russian interference because not a shred of evidence has been presented to prove that senior Russian officials were actually behind the hacking of Hillary’s emails…but who needs facts when you have a complicit media eager to advance whatever propaganda is necessary to maintain power?

The sources did not elaborate on the exact measures the CIA was considering, but said the agency had already begun opening cyber doors, selecting targets and making other preparations for an operation. Former intelligence officers told NBC News that the agency had gathered reams of documents that could expose unsavory tactics by Russian President Vladimir Putin.

Vice President Joe Biden told “Meet the Press” moderator Chuck Todd on Friday that “we’re sending a message” to Putin and that “it will be at the time of our choosing, and under the circumstances that will have the greatest impact.”

When asked if the American public will know a message was sent, the vice president replied, “Hope not.”

Former CIA officers interviewed by NBC said that there is a long history of the White House plotting potential cyber attacks against Russia.  That said, none of them were ultimately carried out because “none of the options were particularly good, nor did we think that any of them would be particularly effective.”

Two former CIA officers who worked on Russia told NBC News that there is a long history of the White House asking the CIA to come up with options for covert action against Russia, including cyber options — only to abandon the idea.

A second former officer, who helped run intelligence operations against Russia, said he was asked several times in recent years to work on covert action plans, but “none of the options were particularly good, nor did we think that any of them would be particularly effective,” he said. 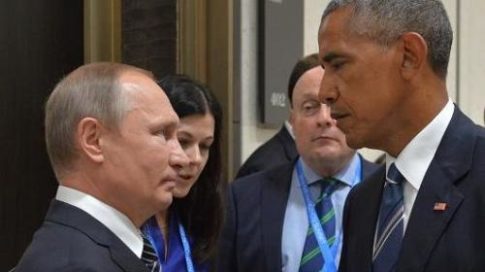 Others warned that the White House has always caved on plans to follow through with cyber attacks because anything the U.S. can do against Russia, they can also do in response.  As one of the former CIA officers said, “if you are looking to mess with their networks, we can do that, but then the issue becomes, they can do worse things to us in other places.”

“We’ve always hesitated to use a lot of stuff we’ve had, but that’s a political decision,” one former officer said. “If someone has decided, `We’ve had enough of the Russians,’ there is a lot we can do. Step one is to remind them that two can play at this game and we have a lot of stuff. Step two, if you are looking to mess with their networks, we can do that, but then the issue becomes, they can do worse things to us in other places.”

Putin is almost beyond embarrassing, he said, and anything the U.S. can do against, for example, Russian bank accounts, the Russian can do in response.

“Do you want to have Barack Obama bouncing checks?” he asked.

Former CIA deputy director Michael Morell expressed skepticism that the U.S. would go so far as to attack Russian networks.

“Physical attacks on networks is not something the U.S. wants to do because we don’t want to set a precedent for other countries to do it as well, including against us,” he said. “My own view is that our response shouldn’t be covert — it should overt, for everybody to see.”

Here is a brief clip of Biden discussing the “covert” planning with NBC’s Chuck Todd.

If the Obama administration is willing to go to such great lengths, literally escalating tensions with another superpower, to protect their candidate from whatever it is that she’s hiding then we suspect whatever WikiLeaks has yet to release could be really good.