We can now put away any speculation whether the US will limit its support and arming of Saudi Arabia in its ongoing campaign over Yemen over “war crime” concerns.

Overnight, the U.S. military not only did not rebuke the Saudis for a military campaign that has claimed nearly 10,000 innocent civilian lives, but became the latest entrant in the Yemen offensive, when it launched cruise missile strikes on Thursday to knock out three coastal radar sites in areas of Yemen controlled by Iran-aligned Houthi forces, in what was supposedly a retaliation after failed missile attacks this week on a U.S. Navy destroyer, U.S. officials said.

The US Navy released the following video of the airstrikes:

As we reported previously, U.S. officials said there growing indications – if no official proof – that Houthi fighters, or forces aligned with them, were responsible for Sunday’s attempted strikes, in which two coastal cruise missiles designed to target ships failed to reach the destroyer.

And like on all previous occasions when the US got involved in a nation’s sovereign affairs, the Pentagon stressed the limited nature of the strikes, aimed at radar that enabled the launch of at least three missiles against the U.S. Navy ship USS Mason on Sunday and Wednesday. What it did, however, was make Saudi incursions into Yemen even easier, providing the Saudi airforce a corridor deep into the country which making sure Yemen was unable to retaliate against its invaders.

Of course, the official line is different:

“These limited self-defense strikes were conducted to protect our personnel, our ships and our freedom of navigation,” Pentagon spokesman Peter Cook adding that “these radars were active during previous attacks and attempted attacks on ships in the Red Sea,” including the USS Mason, one of the officials said, adding the targeted radar sites were in remote areas where the risk of civilian casualties was low.

In retrospect one now wonders if the “cruise missiles” that fell close to the US ships were merely the latest false flag providing the US cover to launch another foreign intervention.To be sure, the Houthis, who are battling the internationally-recognized government of Yemen President Abd Rabbu Mansour al-Hadi, denied any involvement in Sunday’s attempt to strike the USS Mason.

On Thursday, the Houthis reiterated a denial that they carried out the strikes and said they did not come from areas under their control, a news agency controlled by the group reported a military source as saying.  The allegations were false pretexts to “escalate aggression and cover up crimes committed against the Yemeni people”, the source said.

it wouldn’t be the first time that the US has done just that to launch an offensive war (without Congressional approval). Sure enough, the US from immediately launching a strategic attack.

According to Reuters, the US military official identified the areas in Yemen where the US strikes took place as near Ras Isa, north of Mukha and near Khoka.

There may have been another reason for the strikes: shipping sources told Reuters sites were hit in the Dhubab district of Taiz province. As the map shows, the area impacted by US air strikes overlooks the Bab al-Mandab Straight known for fishing and smuggling; also known for being one of the world’s busiest transit spots. 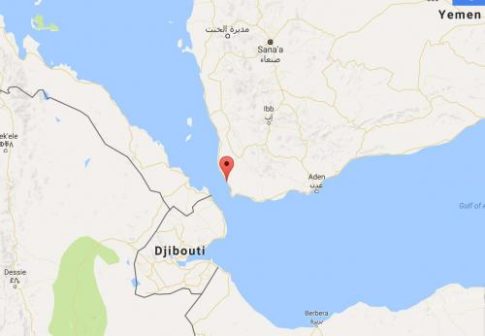 The missile incidents, along with an Oct. 1 strike on a vessel from the United Arab Emirates, add to questions about safety of passage for military ships around the Bab al-Mandab Strait, one of the world’s busiest shipping routes.

This latest US attack appears to be just the beginning: Pentagon spokesman Peter Cook warned against any future attacks, adding that “The United States will respond to any further threat to our ships and commercial traffic, as appropriate.”

The United Arab Emirates (UAE), a leading member of a Saudi-led Arab coalition fighting to end Houthi control, denounced the attacks on the Mason as an attempt to target the freedom of navigation and to inflame the regional situation.

Although Thursday’s strikes against the radar aim to undercut the ability to track and target U.S. ships, the Houthis are still believed to possess missiles that could pose a threat.

Reuters has reported that the coastal defense cruise missiles used against the USS Mason had considerable range, fuelling concern about the kind of weaponry the Houthis appear willing to employ and some of which, U.S. officials believe, is supplied by Iran.  One of the missiles fired on Sunday traveled more than two dozen nautical miles before splashing into the Red Sea off Yemen’s southern coast, one U.S. official said.

And suggesting that Yemen is about to become the next major geopolitical hotzone, earlier today Iran’s semi-official Tasnim news agency reported that Iran sent two warships to the Gulf of Aden on Thursday, establishing a military presence in waters off Yemen where the U.S. military launched cruise missile strikes on areas controlled by Iran-backed Houthi forces.

“Iran’s Alvand and Bushehr warships have been dispatched to the Gulf of Aden to protect trade vessels,” Tasnim reported.

As a result, we expect many more “false flag” events in the coming days.