– Germany To Cut Off Welfare Benefits For EU Citizens:

In what may be the latest indication that Merkel’s immigration policy blowback is being heard by the government, Germany’s Handelsblatt reports that Merkel’s government plans to prohibit foreign E.U. citizens from receiving welfare benefits for five years if they haven’t worked in Germany before.

Labor Minister Andrea Nahles, a center-left Social Democrat, introduced a corresponding draft measure during a cabinet meeting of Chancellor Angela Merkel’s coalition government on Wednesday, according to the news agency Reuters. Under the draft law, E.U. citizens can claim one-time assistance for the period of a month to pay for food and shelter. They can also receive a loan to cover the cost of the trip back to their home country if they fail to find work.

Nahles is seeking to close a loophole which arose from a ruling by the Federal Social Court in 2015. The court ruled that unemployed E.U. citizens have a right to welfare benefits after six months. Ms. Nahles said in the daily Frankfurter Allgemeine Zeitung on Wednesday that the “free movement of labor doesn’t mean one can claim German welfare benefits after a short stay without working.” She called for a legal framework within the European Union to coordinate member states social welfare systems to prevent people from making unjustified claims

On the other hand, considering the ECB’s dire need to find more debt to monetize, paying for immigrants’ welfare benefits, especially if funded through the issuance of new debt, may not be the worst outcome for Europe where as Ray Dalio recently calculated, the ECB has only 8 months of QE “runway” left if the central bank fails to change the parameters of its debt monetization program. 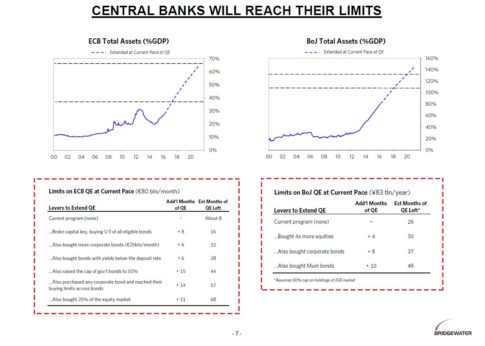