Just when you thought it was safe to selfie you latest WalMart-looting or molotov-cocktail-throwing night out, think again. According to the ACLU, law enforcement officials implemented a far-reaching surveillance program to track protesters in both Ferguson and Baltimore during their recent uprisings and relied on special feeds of user data provided by three top social media companies: Twitter, Facebook and Instagram. 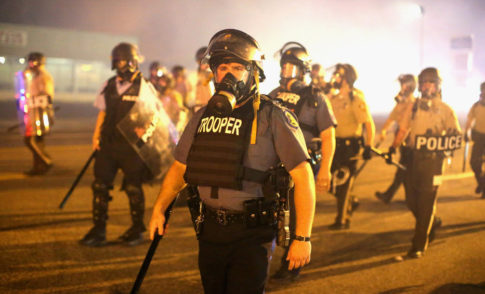 The ACLU of California has obtained records showing that Twitter, Facebook, and Instagram provided user data access to Geofeedia, a developer of a social media monitoring product that we have seen marketed to law enforcement as a tool to monitor activists and protesters.

We are pleased that after we reported our findings to the companies, Instagram cut off Geofeedia’s access to public user posts, and Facebook has cut its access to a topic-based feed of public user posts. Twitter has also taken some recent steps to rein in Geofeedia though it has not ended the data relationship.

Further steps are required if these companies are to live up to their principles and policies by protecting users of all backgrounds engaging in political and social discourse.

We now know the following about these agreements:

Because Geofeedia obtained this access to Twitter, Facebook and Instagram as a developer, it could access a flow of data that would otherwise require an individual to “scrape” user data off of the services in an automated fashion that is prohibited by the terms of service (here and here). With this special access, Geofeedia could quickly access public user content and make it available to the 500 law enforcement and public safety clients claimed by the company.

As Engadget summarizes, law enforcement’s ability to monitor the online activities of protesters could have a chilling effect on First Amendment rights, the post asserts.

“These platforms need to be doing more to protect the free speech rights of activists of color and stop facilitating their surveillance by police,” Nicole Ozer, technology and civil liberties policy director for the ACLU of California, told the Washington Post.

“The ACLU shouldn’t have to tell Facebook or Twitter what their own developers are doing. The companies need to enact strong public policies and robust auditing procedures to ensure their platforms aren’t being used for discriminatory surveillance.”

“1984 called, it wants its state surveillance scheme back.”