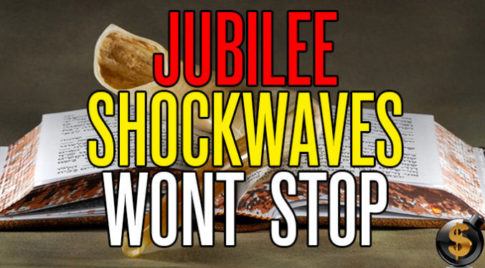 – Jubilee Shockwaves to Continue Throughout this Fall:

The Jubilee Year has officially ended… or has it?

I received this about a month ago from a Jewish scholar:

I reported it to TDV subscribers, but haven’t mentioned it in public, mostly because there were so many massive events occurring this last weekend that a discussion of alternative dates seemed besides the point. But I do want to mention it.

I am not telling you this because I want to especially focus on October 11th.  However, I want it to be public record, if something does occur on that day. After all, October 2nd, which was the assumed end day of the Jubilee, fell on a Sunday, so we knew there couldn’t be any market crash on that exact date.  And the same happened last year with the Shemitah, it also ended on a Sunday.

But, October 11th is a Tuesday, where the markets will be open… in October.  In a Shemitah/Jubilee year.  When was the biggest market crash of all time (23% in one day)? – in an October, just after a Shemitah (a little less than 3 weeks after) – It was Black Monday in 1987.

They wouldn’t do so in this fashion if they weren’t being pre-planned to send a message.

Certainly, the 2016 Jubilee, to date, has been filled with massive events.  The world’s worst start to a year in the stock markets occurred in January.  And then the biggest crash in world stock markets happened just a day after another echelon event, Brexit, which signified the fracturing of the EU.

And, of course, just in the last few days, a flurry of major events.

The control of the internet was transferred from the US to the UN this weekend.  And the Chinese yuan was added into the IMF’s SDR basket.

The idea is to weaken anything associated with the West in order to build up the rest of the world. That’s one reason the BRICs were created (by Goldman Sachs) and why the IMF is building out its SDR basket with non-Western currencies.

We call the trends that continue to ruin the West “Shemitah Trends.” Sometimes these Trends are building and sometimes they are detonating with tremendous destructive force.

I expected some of these Trends to detonate, or at least expand, in October and certainly we’re seeing signs of that with the collapse of the European banks including bankrupt Deutsche.

On a personal note, seeing Deutsche Bank’s ATMs go offline this weekend along with ATMs of one of Canada’s largest banks, TD, made me wonder if I was prepared enough for what was coming.

It isn’t until it happens, it seems, that most people (including myself to an extent), take action.

For a few hours this weekend I was kicking myself for still having a fairly substantial amount of money sitting in banks… of course, I own gold, silver and bitcoin, but I’d become lazy in making sure I regularly replenished them from my fiat holdings.

Luckily for me and perhaps for you, everything didn’t shut down this weekend. But, I believe it is a temporary reprieve.

Nothing we have talked about over the past few months, or years, has changed.  Everything is in dreadful shape. The Russians, as just one example, just started a drill of 40 million people preparing for nuclear war this week after all US/Russia diplomatic negotiations ended over Syria.

No one knows exactly when some very bad things may happen… we can only guess.  But my opinions on what to do haven’t changed at all in the last few days. In fact, it has just made me realize how lucky I am to have a bit more time to prepare.

Plus, in the meantime, we continue to make profits. TDV’s Senior Analyst, Ed Bugos, just issued an ingenious option play on Deutsche Bank where we will make money if Deutsche Bank collapses OR if it is bailed out and shares rise in price.

And, late Monday night, before yesterday’s plunge in gold & silver (which looks quite similar to the precious metals plunge just prior to the 2008 collapse), Ed issued an alert notifying subscribers that a plunge, of the size of what occurred yesterday, was possible.  You can get access to all of Ed’s analysis at TDV Premium here.

Aside from 2001 and 2008, Shemitah related collapses never occurred exactly on the end date.  As I pointed out above, the biggest crash on the Dow of all time came about three weeks after the Shemitah.

Make preparations for chaos because we expect nothing but more of it in the coming months… Don’t be like many who wait to the last second before starting to prepare, because next time it will be too late.