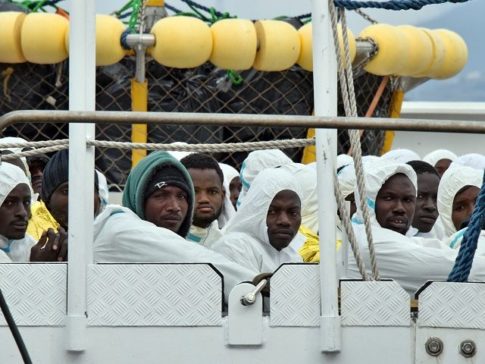 The dramatic situation of Italy’s overpacked migrant welcome centers has obliged authorities to delay debarkation of hundreds of new arrivals, leaving them for the moment on board the rescue vessels that brought them.

On Thursday, a Spanish Civil Guard ship carrying 1258 migrants rescued off the coast of Libya landed at Cagliari, on the Italian island of Sardinia. After a two-day sea journey, the vessel Rio Segura was told that all the migrant shelters are full and therefore the migrants would have to remain aboard the ship until provisions could be made for their housing.

A new procedure of migrant identification and registration has been instituted according to which photo identification would take place before migrants will be permitted to descend from rescue vessels. The situation in Sardinia is so serious that the Cagliari Civil Defense has been using the terminal intended for cruise ships as the identification center for the first reception of migrants.

“The operation could go on for three or four days,” said the commissioner Danilo Gagliardi. “The structure will remain in operation until we can identify all as required under the new ministerial directive.”

Officials say that all the welcome centers and refugee shelters in Sardinia’s four provinces are completely full and can accept no more migrants until some of the present occupants are relocated.

“The situation is deteriorating,” says Omar Zahed, spokesman for the Islamic community of Sardinia. “The reception is improvised. It is not possible that when refugees arrive here there is still no plan what to do with them. Unfortunately, we cannot stop the flow, it is time that we organize for the long term.”

Italy has been particularly hard hit this week by the arrival of thousands of migrants. Between Monday and Tuesday, a record number of over ten thousand mostly African migrants were rescued in the Strait of Sicily and brought to Italy, bringing the year’s total to over 142,000.

The Italian Coast Guard coordinated dozens of rescue missions off the coast of Libya in the two days, recovered over 6,000 migrants on Monday in one of the largest single-day operations of the European migration crisis, and then another 4,655 on Tuesday.

Federico Soda, Director of the International Organization for Migration (IOM) Office in Rome, said that among the migrants arriving in Italy there has been a noted increase in West African nationalities. “Often these are people who leave their country of origin without a specific destination. Libya is where many are smuggled to and the majority of migrants there face extreme violence and abuse. Some, scared for their lives, decide to continue their journey to Europe,” he said.

According to the IOM, the Channel of Sicily is currently the deadliest border in the world: 3,610 people died while crossing the Mediterranean in 2016 and out of these, 3,134 died trying to reach Italy.