German authorities are debating the contours of a new law that would crack down on child marriages after it emerged that some 1,500 underage brides are now living in the country.

The married minors are among the more than one million migrants from Africa, Asia and the Middle East who entered Germany in 2015.

The German Interior Ministry, responding to a Freedom of Information Act request, recently revealed that 1,475 married children are known to be living in Germany as of July 31, 2016 — including 361 children who are under the age of 14.

Most of the married children are from Syria (664), Afghanistan (157) and Iraq (100). Nearly 80% (1,152) are girls. The true number of child marriages in Germany is believed to be much higher than the official statistics suggest because many are being concealed.

German law currently allows minors aged 16 or over to get married if their partner is of legal age and the parents or guardians consent. Germany does not recognize marriages contracted abroad if a partner is under 14, but German family courts have discretion to determine the validity of marriages concluded abroad by minors who are 14 or older. 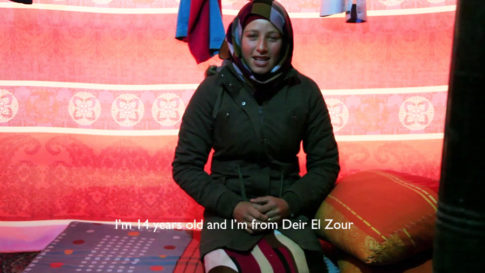 ‘
Zeinab, a married 14-year-old girl refugee from Syria, lives in a tent-camp in Lebanon. Germany hosts many thousands of migrants and refugees from Syria, among whom are at least 664 married children. Under current law, German family courts have discretion to determine the validity of marriages concluded abroad by minors who are 14 or older. (Image source: World Vision UK video screenshot)

In May, an appeals court in Bamberg recognized the marriage of a 15-year-old Syrian girl to her 21-year-old cousin. The court ruled that the marriage was valid because it was contracted in Syria, where such marriages are allowed according to Islamic Sharia law, which does not set any age limit to marriage. The ruling effectively legalized Sharia child marriages in Germany.

The case came about after the couple arrived at a refugee shelter in Aschaffenburg in August 2015. The Youth Welfare Office (Jugendamt) refused to recognize their marriage and separated the girl from her husband. The couple filed a lawsuit and a family court ruled in favor of the Youth Welfare Office, which claimed to be the girl’s legal guardian.

The court in Bamberg overturned that ruling. It determined that, according to Sharia law, the marriage is valid because it has already been consummated, and therefore the Youth Welfare Office has no legal authority to separate the couple.

The ruling — which has been described as a “crash course in Syrian Islamic marriage law” — ignited a firestorm of criticism. Some accused the court in Bamberg of applying Sharia law over German law to legalize a practice that is banned in Germany.

Monika Michell of Terre des Femmes, a women’s rights group that campaigns against child marriage, said: “A husband cannot be the legal guardian of a child bride because he is involved in a sexual relationship with her — a very obvious conflict of interest.”

The Justice Minister of Hesse, Eva Kühne-Hörmann, asked: “If underage persons — quite rightly — are not allowed to buy a beer, why should the lawmakers allow children to make such profound decisions related to marriage?”

Others said the ruling would open the floodgates of cultural conflict in Germany, as Muslims would view it as a precedent to push for the legalization of other Islamic practices, including polygamy, in the country.

The exact number of child marriages in Germany is unknown, partly because German authorities appear to have lost track of the identities or whereabouts of potentially hundreds of thousands of migrants. Of the 1.1 million migrants who entered Germany in 2015, only 477,000 have applied for asylum. The German government blames the discrepancy on an accounting problem, but others say that many migrants have gone underground to avoid being deported because they are not legitimate refugees fleeing war zones but economic migrants seeking a better life in Germany.

The Justice Minister of Baden-Württemberg, Guido Wolf, said foreign marriages should only be recognized if one partner is at least 16 years old and the other is 18, in line with existing German marriage law. Wolf described marriages contracted at 14 or 15 years of age as forced marriages. “I find it hard to believe that someone who is younger than 16 would decide autonomously and self-determinedly for marriage,” he said. Wolf has called for raising the legal age for all marriages in Germany to 18.

Members of Chancellor Angela Merkel’s Christian Democrats and their Bavarian allies in the Christian Social Union have called for outlawing child marriage. A strategy paper states:

“An 11-, 13- or 15-year-old girl belongs not in marriage but in school. In the future, the principle must be the annulment of child marriages contracted abroad. The primacy of the child’s welfare and the equal treatment of men and women are pillars of our society and of our understanding of values. Child marriage is therefore absolutely incompatible.”

A proposed law, which will be submitted to the German parliament in November, would require all Youth Welfare Offices (Jugendämter) in Germany to report child marriages as soon as they become aware of them, and to bring all such cases before family courts so that they can be annulled. Judges would be allowed discretion to make exceptions only in cases where the wife is already close to the age of majority.

“This is not a question of tolerance and openness, but a question of the protection of children and minors. We therefore need a clear rule: To assess the marriageable age of a person — that is, the question of the age at which marriage can be contracted — will in the future always be determined by German law.”

Stephan Harbarth of the Christian Democratic Union called for child marriage to be abolished in Germany by the end of 2016. “According to our cultural perspective, child marriage is unacceptable,” he said. “The suffering of those affected requires quick action. Our proposals are on the table. We can immediately legislate. For us, family clans do not decide about a marriage. Rather, each individual does. We will not tolerate illegal Islamic parallel justice — not even in marriage.”