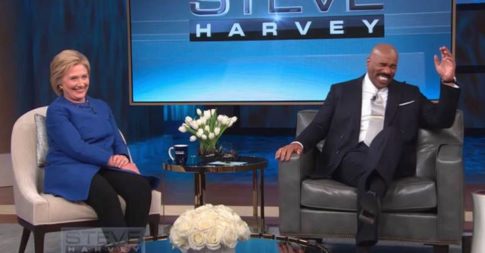 – Leaked Memo Confirms Hillary Was Given Questions Ahead Of Interview:

Yesterday, in the latest indication that few things involving Hillary Clinton’s presidential campaign are left to chance, we reported that Brennan Leach, a child actor and daughter of a PA Democratic Senator, was used to ask staged questions at a recent Hillary town hall. And while there has been some unconfirmed speculation that the Democratic presidential candidate may have colluded with Lester Holt during her first presidential debate, we now have further proof that “preparation” for Hillary means being fully informed of what is about to take place well ahead of time.

According to a leaked memo obtained by the Washington Free Beacon, the Clinton campaign was sent all questions one week by the program before the interview between Clinton and Harvey on Feb. 17. The memo was sent by campaign spokeswoman Karen Finney, formerly an MSNBC host, and communications staffer Betsaida Alcantara. In it the Clinton aides wrote one week before the taping that “Steve is known to be a host who goes out of his way to make his guests feel comfortable. We coordinated closely with the show’s producers on the script and format of the show.”

The memo was attached to an email posted on the website DCLeaks.com. According to the Free Beacon, one of the individuals behind the website – which has been alleged of working with the Russian government – provided the website with a password to access that email and others sent to and from Clinton volunteer Beanca Nicholson, who was doing advance work for a campaign swing through Chicago that included the Harvey interview.

According to the memo, Clinton’s staff saw Harvey’s show as an effective and low-risk way to reach out to female and African American voters. They also noted recent episodes of the show that focused on issues that Clinton had stressed during her campaign. “Clinton’s staff pitched the show on some of those issues, including gun control, and noted that Harvey would not likely force Clinton to go into detail defending her positions” the WFB notes.

Questions included were about Clinton’s granddaughter, the former secretary of State’s pizza preferences (thin crust versus deep dish) and her support of gun control policies.

“Please note that the tone of the show is generally light so even on policy questions, Steve won’t go too deep into details,” the memo read.

The campaign and the Harvey’s producers also coordinated on which parts of Clinton’s biography would be introduced and how.

“During this segment Steve will take a trip down memory lane with YOU to talk about the different moments of YOUR life displayed in the photographs below,” the memo stated.

In the most amusing moment during the interview, Clinton acted “surprised” when the photos were placed on screen.  “Oh boy. Oh my goodness,” she said when a photo of her at 12-years-old was placed on the screen.

Harvey also filmed segments for a special on the Flint water crisis that would air about four weeks later during the same taping session. Once again, Clinton was briefed ahead of time on the questions that Harvey would ask, including one on her February visit to the Michigan city and on efforts to address crime and joblessness.

After the report hit, a Harvey spokesperson sent the Washington Free Breacon the following statement:  “As happens with many shows like ours, producers conduct pre-interviews highlighting areas of interest and possible questions. This allows the guests to prepare for their appearance and provides the most informative experience for the viewers.”