– China Shocker: A Quarter Of All Companies Can’t Pay The Interest On Their Debt:

Almost exactly one year ago, we reported that as a result of the commodity crash of 2015, more than half of Chinese companies in the commodity sector did not generate enough cash flow to pay the interest on their debt. Months later this has manifested in a countrywide push for debt-for-equity exchanges, and outright bankruptcies including the first ever liquidation of a Chinese state-owned enterprise. 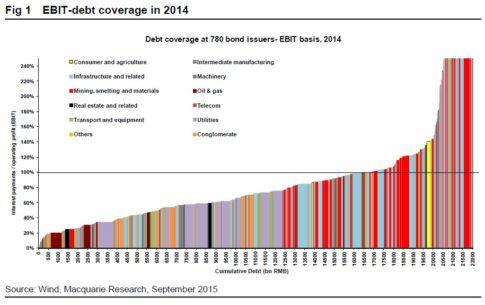 While dramatic, the question remained: what about other Chinese companies not directly involved in the commodity space? We now know the answer: according to Reuters, profits at roughly a quarter of all Chinese companies were too low in the first half of this year to cover their debt servicing obligations, i.e., merely the mandatory interest payment let along debt maturities, as earnings languish and loan burdens increase.

So with unprecedented debt – and as the IIF chart below shows, China’s total debt/GDP of 300% has never been lower … 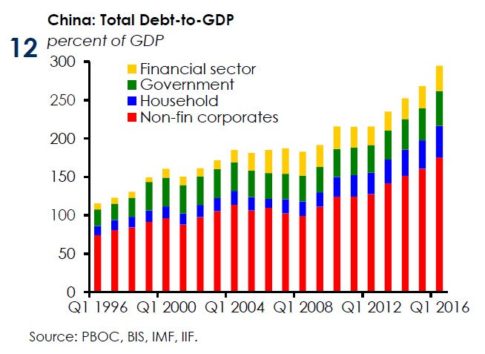 … why are mass defaults not a daily staple of the Chinese economy, or as Reuters notes “as corporate China sits on $18 trillion in debt, equivalent to about 169 percent of China’s GDP, few firms reported feeling the heat.“

The answer? In much the same way that the Dallas Fed “nudged” US banks in early 2016 to avoid taking aggressive marks on the E&P loan exposures, “Chinese lenders are heeding Beijing’s call to support the real economy and so are rolling over company debt or granting repayment waivers, sometimes for years, specialist lawyers and investors said.”

According to Reuters, this is evidence that China may be in for a long period of Japan-like stagnation rather than a single event triggering a crisis – what some economists call a “Lehman moment” after the collapse of Lehman Brothers in 2008, which touched off the global financial crisis.

“They are kicking the can down the road for stability in the short term,” said Roland Mieth, Singapore-based emerging markets portfolio manager for U.S. fund manager PIMCO. “China can maintain status quo for many years to come, like Japan did with their leverage, without triggering a financial crisis.”

However, by engaging in this indirect creeping bailout, Beijing has angered international institutions who have warned China to stop financing weak firms, especially inefficient state-owned enterprises (SOEs), which tend to crowd out the private sector. More defaults are needed, they say, to improve credit allocation and stop wasteful spending in the economy.

Alas, China can not afford to face reality as the alternative remains millions of angry laid off workers who have no social safety net to fall back on. To be sure, while China has recognized the need to wean its corporate sector off of cheap loans, Premier Li Keqiang has also promised credit would keep growing, and state-run banks have been urged to support small and medium enterprises (SMEs).

And banks are listening, say lawyers and investors, with companies given three or four years of grace, when they do not pay interest, or helped to restructure bonds at full value, essentially, rolling them over. “Premier Li has asked banks to rollover loans, especially for SMEs. That’s a clear reason why bond defaults are coming down,” said brokerage CLSA’s head of China strategy, Francis Cheung.

“(Banks) have shifted focus from bad debt recognition to economy-supporting measures. Banks are giving more grace period and reporting more stable NPLs (non-performing loans), even after guiding earlier that these ratios will rise.”

In other words, China’s zombie firms are back, and bigger than ever.

Others have already noticed the substantial slowdown in bankruptcies. Goldman Sachs estimated last week there was only one default in the domestic Chinese bond market in the past three months, compared with at least 10 in the first half of the year. Of course, onshore defaults could and will still rise – rating agency S&P says the credit quality of about 240 Chinese companies it rates is deteriorating more quickly than at any time since 2009. However, even the rating agency is stunned, saying that the muted default situation “is an aberration given the sharp deterioration in credit risks.”

To be sure, the fundamentals are not improving: Reuters calculates that profit in the first half of 2016 fell a median 0.8% for 527 mainland listed firms and grew just 0.3% for a group of 93 Hong Kong-listed Chinese companies. Meanwhile, the real dynamo of China’s growth, overall debt levels for both are at record highs.

This means that for the 93 of Hong Kong’s largest Chinese companies with listings stretching back to 2011, their ability to repay debt with current profits has only been lower once in the last five years. Almost half have operating profit less than three times their interest payments – heading towards an unhealthy balance.

The punchline: one quarter do not make enough to cover their interest costs, the analysis shows.

It is here that the infamous “Ponzi Finance to Minsky Moment” transition emerges.

As a result of soaring corporate debt, many corporations face increasingly lower profitability and less long-term investment. Increasingly, debt is being used to pay back other debt and not to fund growth. 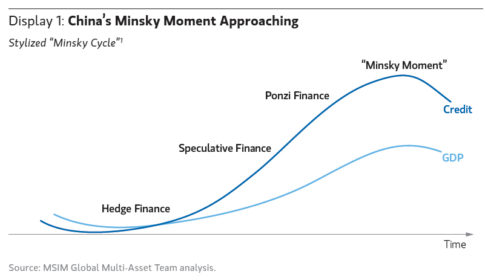 As a reminder, “Ponzi finance” is the technical term for a regime in which borrowers have insufficient cash flows to pay either principal or interest and therefore must either borrow or sell assets to make interest payments. And This is where increasingly more Chinese companies find themselves now.

Worse, as we reported last week when we cited the latest China Beige Book, whose assessment of the Chinese economy is that it was a “lot more negative than people think” corporate debt continues to surge: the report found the highest number of firms in three years took loans in the third quarter.

But while many companies reported they were repaying debt, some already deeply indebted groups said they had little trouble accessing more loans, especially for acquisitions overseas. “We don’t have this problem,” said an executive in the company secretary’s office at Shanghai-listed Jinggong Steel. “We can just apply for super-short financing from Chinese banks, we are not anxious.”

We shouldn’t remind readers that it was the sudden freeze in the “super-short term”, shadow funding market that precipitated the US crash in the aftermath of the Lehman failure. It is now obvious that the next place to not have learned the lesson from Lehman’s failure is China, the only difference is that while US banks had under $10 trillion in assets at the time, China’s financial sector has about $35 trillion in “assets” at this moment, and soaring.