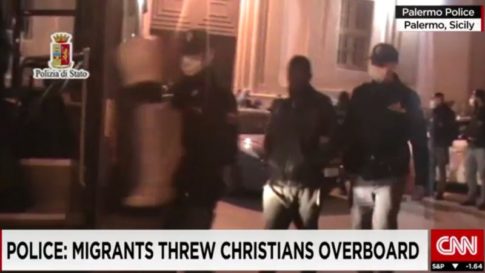 Cameroonian MUSLIM illegal alien boat captain has been put on trial in Spain for the murder of six Christian passengers on a flimsy migrant boat specifically because of their Christian religious beliefs.

Telegraph  Survivors of the hellish 2014 crossing from Morocco to the southern shore of Spain described how the accused, the Muslim captain of the inflatable craft identified as Alain N. B., blamed Christian passengers for the onset of a storm and forced six men off the boat to a certain death.

According to some of the 29 survivors from the more than 50 sub-Saharan migrants who boarded the boat near Nador, northern Morocco, the accused “blamed the rough seas which were rocking the boat on the prayers led by a Catholic pastor on board”.

Witnesses told investigators that the captain and his second in command, another Cameroonian man who died in Spain before the trial began, “believed that the weather worsened every time the victims prayed”.

According to testimony, the two Cameroonians used planks of wood they ripped from the rigid structure of the boat to beat the Nigerian pastor. “They badly wounded him before throwing him overboard”, the public prosecutor wrote before the start of the trial in Almería.

The two men searched passengers for amulets or Christian symbols concealed under their clothing and similarly attacked at least five other migrants, all of whom are assumed to have drowned.

According to the prosecution, Alain N. B. “was aware that the victims could not possibly survive and that they would die, either by drowning, from the cold, or from the physical injuries they had suffered. He was aware of the low temperature, the rough seas and the great distance from the coast and the absence of any nearby boats which could rescue them”.

The prosecutor has asked for six separate terms of 15 years for murder with the aggravating factor of “religious motivation”, amounting to a 90-year sentence. Two Cameroonians were found to be carrying €1,500 in cash, the same sum that witnesses said they had found on their victims before forcing them overboard.