Deutsche is to big to save, thanks to former CEO, Bilderberg & Rothschild puppet Josef Ackermann.

Continue to prepare for collapse, the greatest financial/economic collapse in world history, accompanied by hyperinflation, civil war and revolution.

While the most recent set of troubles plaguing Deutsche Bank have been duly documented here, most recently yesterday when the stock price tumbled once again just shy of all time lows over fears the bank’s multi-billion DOJ settlement could severely impact its liquidity and/or solvency, this may be the first time we have heard the “n“-word tossed around in an official German publication: as Germany’s top financial newspaper, Handelsblatt said, “German financial officials reacted with shock and dismay to the leaking of a U.S. government demand for a $14 billion fine against Deutsche Bank, which may ultimately need a state bailout to pay the bill.”

Some more details from the article titled “Deutsche Bank in New Existential Crisis“:

Discussion of Deutsche Bank’s shaky capitalization has burst back to life, with renewed speculation on whether Chief Executive John Cryan will be forced to raise new capital, which he had previously ruled out, or make emergency asset sales.

Some have even raised the possibility of a government bailout of Germany’s largest bank, which would be a defining event and a symbolic blow to the image of Europe’s largest economy.

And some more troubling truth:

Many analysts fear the bank may be in a vicious circle, with losses and cancelled dividends pushing down share prices and preventing the rebuilding of a capital buffer.

One thing is clear. With this many unresolved legal issues, any recapitalization is likely to mean selling new shares at knock-down prices. One bright spot for the bank may be ongoing negotiations with finance company Phoenix Group for the sale of Abbey Life, its British insurance subsidiary.

Phoenix recently confirmed talks were at an advanced stage. Any sale would bring €1 billion into Deutsche Bank’s coffers – a welcome sum, but not enough to solve the bank’s problems.

So could a state bailout for Deutsche Bank be needed? With next year’s general election looming, and the populist Alternative for Germany party rising in the polls, this would be the last thing the German government wants. But there is no panic in the federal finance ministry as yet. In the past, American banks have been confronted with similarly breathtakingly initial settlement demands, only to see them radically reduced in the final deal.

Unfortunately, Deutsche Bank may not be so lucky. Even if theories are discounted that the $14-billion charge is payback for European tax demands on Apple, the German bank may face tough treatment in the United States.

And then there was the FDIC’s vice chairman, former Kansas Fed president Thomas Hoenig, piling on some more pain for the troubled German lender:

Deutsche Bank AG’s status as the riskiest among more than two dozen large banks is worsening, according to a measure of its leverage used by Federal Deposit Insurance Corp. Vice Chairman Thomas Hoenig, adding to woes for Germany’s biggest lender as it braces for a large settlement over mortgage securities.

In a twice-yearly look at what’s known as the leverage ratio — a lender’s capital measured against its assets — Deutsche Bank drags behind the rest of the major global banks, according to data released Tuesday by Hoenig. A lower ratio means the bank has less of a cushion if a crisis arises. Deutsche Bank’s ratio of 2.68 percent as of June 30 is about half of the average for the eight biggest U.S.-based firms including JPMorgan Chase & Co. and Citigroup Inc. It also trails its ratio of 3.01 percent from last year.

Hoenig — among the loudest advocates for stronger bank-capital requirements — regularly releases a tally of capital levels at the largest banks doing business in the U.S. While it’s not an official scoring by the FDIC, his calculations put more emphasis on derivatives exposure, which Hoenig has said is the best way to figure out the riskiness of each institution. The regulator has said before that Deutsche Bank’s capital ratio is too low. “As markets have recovered and as central banks around the world continue quantitative easing programs, the incentives for increasing financial leverage have intensified,” Hoenig said in a statement.

The market seems to agree: as of this moment DB is trading within fractions of its all time low. 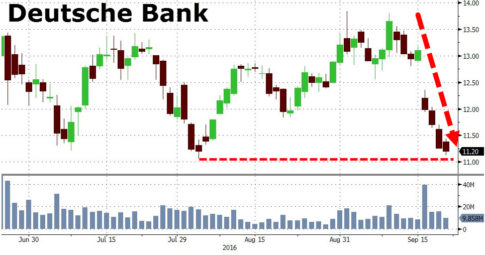