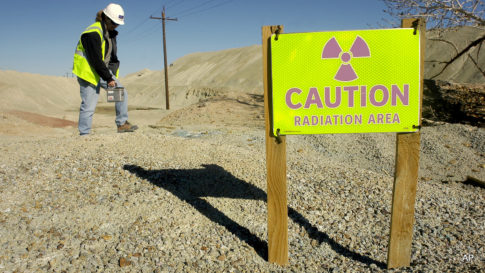 An EPA employee takes a radiation level reading at an abandoned mine in, Nev. After decades of complaints, the EPA has began work to reverse the devastating effects of uranium mine pollution on the Navajo Nation.

The EPA and Navajo Nation have identified 523 abandoned uranium mines scattered throughout Arizona and New Mexico, including dozens located dangerously close to homes or water sources.

MINNEAPOLIS — A cleanup effort funded by a $1 billion bankruptcy settlement is underway to reverse the devastating effects of uranium mine pollution on the Navajo Nation.

Hundreds of abandoned mines are scattered across their territory in Arizona and New Mexico, and on Aug. 31 the Environmental Protection Agency issued a request for bids, offering $85 million to environmental assessment firms that can document the damage and determine where best to focus resources.

“EPA’s contract is a vital step in the effort to clean up the legacy of uranium contamination in and around the Navajo Nation,” said Enrique Manzanilla, director of the EPA Superfund in the Pacific Southwest, in a press release.

Manzanilla added that the agency would prioritize Navajo businesses and individuals capable of doing the work.

“Since the 1950s, waste from active and inactive uranium mines has seeped into the Navajo Nation’s water supplies, which has led to increased rates of cancer, genetic defects, Navajo neurohepatopathy, and increases in mortality,” noted Mnar Muhawesh, MintPress News’ editor and publisher, in a Feb. 29 analysis of the Navajo mining pollution crisis for “Behind the Headline.”

Laurel Morales, a reporter with Arizona Public Media, wrote on Sept. 2 that the EPA has removed “thousands of cubic yards of mine waste” and rebuilt about 50 homes contaminated by mine waste since 2008.

“These areas in northeastern Arizona and parts of New Mexico and Utah are peppered with abandoned mines as well as sites filled with mining waste, some with potentially dangerous levels of gamma radiation.”

In an interview with DeRose, Clancy Tenley, the EPA official in charge of the Navajo Nation clean up program, said:

“This is only one element of a much larger project since 2008. EPA and five other agencies have invested more than $100 million in cleaning up and assessing abandoned mines on the Navajo Nation.” 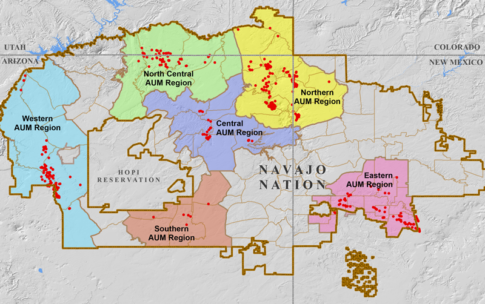 Uranium mining occurred in six major areas of the Navajo Nation, now designated as AUM (abandoned uranium mine) Regions. This map indicates the 521 sites mapped by the EPA, but there are estimated to be hundreds more. (Source: EPA)

So far, 523 mines have been identified in the region, and the EPA and Navajo Nation have made a list of 46 which pose the greatest threat to residents or water sources. The EPA has cleanup agreements with 30 of the companies responsible for these mines, while the Justice Department will cover the cleanup costs for the remaining 16. Nine of these dangerous mines have already been targeted for treatment.

The EPA’s budget for the Navajo cleanup efforts largely originates from a $1 billion bankruptcy settlement with Tronox Incorporated, formerly known as Kerr-McGee Corp., which operated mines throughout the region. Many other mining companies have shut down or run out of money, making them more difficult to pursue in court for damages.

Lack of reliable access to clean, unpolluted water is a recurring issue for Native American and First Nations communities throughout North America. About 40 percent of the Navajo lack running water, with many depending on monthly water deliveries for survival.

In recent months, thousands of Native Americans from over 100 tribes have gathered at the Sacred Stone Camp in Fort Yates, North Dakota, to oppose the Dakota Access pipeline. Activists say construction threatens waterways and sacred sites vital to the Standing Rock Sioux.

Watch “Mnar Muhawesh: Public Silent As Native Water Supplies Continue to Be Poisoned” from MintPress News’ “Behind the Headline”: