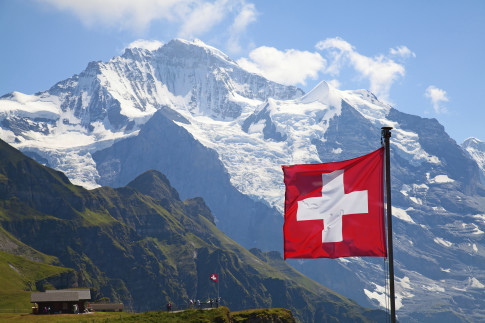 – The Swiss Begin To Hoard Cash:

While subtle, the general public loss of faith in central banking has been obvious to anyone who has simply kept their eyes open: it started in Japan where in February hardware stores were reported that consumers were hoarding cash, as confirmed by the spike in demand for safes, “a place where the interest rate on cash is always zero, no matter what the central bank does.” Then, as we reported just over a week ago, Burg-Waechter KG, Germany’s biggest safe manufacturer, posted a 25% jump in sales of home safes as a result of “significantly higher demand for safes by private individuals, mainly in Germany.”

And now, at long last, the revulsion to banking and the fractional reserve model has finally reached the country that according to many created modern banking as we know it: Switzerland.

Only unlike Japan and Germany, the Swiss are much more subtle about their cash hoarding than telling the neighborhood they have a stash of cash in their home by publicly buying a safe; instead, as Bloomberg reports, more and more companies are taking out insurance policies to protect their cash hoards from theft or damage.

“Because of the low interest rate level, we note increasing demand for insurance solutions for the storage of cash,” said Philipp Surholt at Zurich Insurance Group AG, among underwriters reporting a surge in such requests. “We’re seeing demand for coverage for sums ranging from 100 million to 500 million francs.”

Where the Swiss also differ from many other nations is that numerous local banks have already passed on negative rates to their wealthiest customers. The SNB imposed NIRP in early 2015, charging banks for excess deposits. Many lenders including UBS Group AG and Credit Suisse Group AG have passed on at least some of the burden, they don’t disclose how much, to cash-rich clients like asset managers and big companies.

Meanwhile, a fascinating arbitrage has emerged between NIRP and insurance costs: Helvetia Holding said it charges about 1,000 francs ($1,020) a year to insure 1 million francs, a fraction of the 7,500 francs a company would pay to park the same amount in a bank for a year, assuming the lender passes on the full charge. While that amount doesn’t include the cost of logistics such as transport or security features like reinforced walls, guards and alarm systems, those may not be an issue for the wealthiest clients who already own their own safes and have their own means of transportation of the physical cash.

Regardless of the tangential costs, the use of such policies has jumped in the recent past.

Companies need to save a lot on bank fees for cash storage to be economical because, in addition to insurance, they have to assume the costs of managing the money, said Roberto Brunazzi, a spokesman for Baloise Holding AG. He said the company has long offered such coverage “but there has been a noticeable increase and now it’s becoming more commonplace.”

But the best news for Swiss residents is that unlike in Europe where the ECB recently banned the €500 banknote, in Switzerland it is relatively easy to store substantial amounts of cash in relatively modest spaces courtesy of the CHF1000 bill, the highest denomination banknote in circulation in Europe. As Bloomberg points out, 1 million francs worth of 1,000-franc bills can fit in a small box.

Furthermore, unless Switzerland bans the 1000 swiss frank note, it may soon trade at a premium to its book value as demand for the “paper” rises. The reason is that more banks have warned that they may one day have to charge ordinary savers – not just big customers – for liquidity. In June, UBS and Credit Suisse exceeded their combined minimum required deposits by about 26 times, putting them about 25.8 billion francs over their exemption. Swiss cantonal banks were about 24 times over the amount they are required to hold at the SNB, or about 12.5 billion francs over their threshold, according to SNB data, which doesn’t break down the figures by bank.

“Negative rates are the dominant topic,” said Markus Gygax, chief executive officer of the Swiss retail bank Valiant Holding AG. “As long as the interest rate on credit keeps falling, it’s a big problem for us.”

For now, there is no need to panic: “Consumers are shielded from the negative interest rates so far,” Oliver Adler, an economist at Credit Suisse, told Bloomberg Television’s Anna Edwards and Rishaad Salamat on Tuesday. “Large institutional investors have had to pay, but in the overall context it’s not dramatic.” However, sensing what is coming, some lenders that are below the SNB’s threshold are taking on other banks’ cash for a fee. As a result, a “market for liquidity” has developed between the banks as a result of negative rates, the Swiss Banking Association said last week in its annual report on the industry.

“Cash hoarding is a problem for monetary policy,” Koch said. “It’s a question of efficiency: the more corporates hoard cash, the smaller the impact of negative rates.”

For now, the SNB says it hasn’t seen evidence of widespread cash hoarding in Switzerland, Bloomberg concludes, to which all we can add is that this is precisely what the very sensible locals would want it to see. Meanwhile, the stealth hoarding continues.