Prepare for the coming crash. (It could already happen this month.) 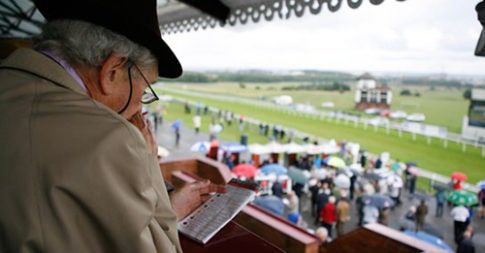 – Betting on Crazylegs in the Final Race:

Since the early 2000s, I’ve been describing a coming economic depression that will dwarf the one that began in 1929. But this is by no means guesswork or crystal ball gazing. Whenever a country (or countries) creates debt that is beyond the level that they can ever repay, an economic collapse is a near-certainty. Today, many jurisdictions, particularly, the US, EU, UK, Canada, etc. have created debt that is far beyond anything the world has ever seen. This assures us that the corresponding collapse will be of epic proportions.

Of course, I’m frequently asked, “When will it happen?” This is all but impossible to predict, but to be perfectly honest, back around 2006, I was guessing, “probably by 2012.” Although I predicted the minor crash of 2008, I felt that the bigger jolt that’s still coming would have been on our doorstep by now. Again, it’s not all that hard to predict the events if you do your homework, but predicting the timing is another matter.

However, I’ve continued to repeat my general principle that when an economic unraveling of major proportions is coming, significant events increase in frequency and severity.

I’ve never bothered to explain why I established this principle as a barometer, and maybe this bears explanation.

The principle is based on human nature. Most people, in any country, tend to assume that they have plenty of time to prepare for eventualities. As they get closer, however, they realise that they’re lagging behind and need to speed up the preparations. This is especially true if they happen to be arrogant, which is commonly the case with governments. They underestimate the timeframe necessary. They also fail to plan for delays along the way. For these reasons, as they get closer to the event, they almost always find that they have to speed up the process or they won’t be ready in time. By the time the actual event is about to take place, they tend to be falling over themselves, in a panic to get all their ducks in a row.

This means that as the lesser events leading up to the main event occur, they do so with greater frequency. Also, they increase in magnitude, as the biggest, least palatable steps are put off as long as possible.

But there’s one more factor that exacerbates this pattern even more. As long as everything seems to be working well, most everyone in the system remains complacent. But, as the events increase in both frequency and severity, each cog in the wheel gets increasingly nervous, and the closer we get, the more each cog is likely to become unglued and do things that are not in keeping with the overall plan. As a result, the situation becomes increasingly chaotic and unpredictable, as each middle manager, each civil servant, each politician, each banker, makes his own sudden moves to protect himself.

As a result, just prior to the main event (the crash), we can expect to be seeing big surprises on an almost daily basis – more bankers being charged with impropriety, more political leaders being ousted, more infighting amongst politicians and more members of the general public scrambling to safeguard their wealth.

Each of these individuals may have a plan as to what he is going to do and when, but his plan may get derailed as others make sudden dramatic moves, changing the field of play with ever-increasing frequency.

When this stage is reached, we should personally have already hunkered down for the storm. We should, in effect, be picturing the tornado on the horizon. We should have pulled in the laundry from the line, shuttered up the house, moved food and water into the root cellar, and now be waiting on the porch to see if we’re likely to be hit. At this point, we should only need to grab the kids and head for the cellar.

In investment terms, this means that if we live in one of the jurisdictions listed above, we should already have gotten out of the markets, emptied our local bank accounts – except for three months of operating expenses, liquidated our local assets as much as possible, moved the proceeds to a jurisdiction that’s likely to weather the storm better, and invested in overseas real estate and precious metals. Further, it would be wise, if possible, to have prepared a bolt hole overseas, should we need to suddenly get on a plane due to riots, food and fuel shortages, government imposition of martial law, etc.

And we’re approaching that final stage at present. Dramatic events are now occurring weekly, and when they reach the daily level, we’ll see the same expression on our neighbours’ faces that we might have been seen on the faces of the Titanic passengers after the ship hit the iceberg. Each individual, each bank, each government will be out to save their own skin. Contracts, laws and treaties will suddenly be abandoned. There will be no coordination at this point. The collapse will be random, and it will be every man for himself.

What we shall witness will be the equivalent of watching a well-trained racehorse running down the track and suddenly, each of his legs panics and decides to do something different. The lack of coordination with this sudden development assures one thing only – that Crazylegs is going to go down hard.

You won’t want to be riding this horse when the time comes; you’ll want to already be out of the racing business.

In the last weeks and months prior to a crash, many people simply bury their heads in the sand and are not at all prepared. Many others get the gut feeling that something is radically wrong but can’t figure out what to do about it. This results in a loss of confidence in the system. People suddenly stop trusting their banking institutions, their governments and their currency. We’re now at that point. Each day, people trust the system less, and even if they don’t understand the severity of the outcome, their anger is rising steadily.

Historically, governments like to drag out the inevitable as long as they can. In particular, they like to get elections out of the way and get the new gang of pretenders in their chairs before a major conflagration is sparked off.

The UK will be looking at elections in October, the US in November. After January, all the flag-waving will be over, and the new gangs will be in their chairs. At any time after this, it would not be surprising to wake up one morning and discover that the odiferous effluvium has, in fact, hit the fan whilst we slept.

So, that’s it, then? We can place “Massive Economic Collapse” in our diaries to occur in February?

Unfortunately, identifying a date for such an event has always proven elusive, even for those who have been studying the situation closely for decades. We can do a fairly good job of describing the dominoes and even predicting a rough order in which they will fall, but an actual date is impossible to predict.

All that we can be certain of is that, when significant events begin to happen on a daily basis and are also increasing in magnitude (increased alleged terror attacks, fracturing financial institutions, increasingly draconian governmental edicts, etc.), we may well have run out of time to prepare. Whatever moves we need to make should already be in place at this point. When the fateful day does come, those who have not prepared will be scrambling for the exit doors, and we will not wish to be crushed in the panic. We’ll want to have already made our own exit quietly.