There is seemingly no end to the number of people and organizations that Colin Kaepernick has offended with his recent comments and decision to “sit out” the national anthem.  Apparently the San Francisco police union was among the offended.  We’re not sure why, really…all Colin said was that they’re racist murderers with less skill than a hairdresser.  Is that offensive?  Per CBS, Colin’s comments about the police included the following:

“There are bodies in the street and people getting paid leave and getting away with murder.”

“There is police brutality — people of color have been targeted by police.  That’s a large part of it. They (the police officers) are government officials. They are put in place by the government so that’s something that the country has to change. There are things we can do to hold them more accountable. Make those standards higher…You have people who practice law, lawyers, who go to school for 8 years, but you can be a cop in 6 months. You don’t have to do the same amount of training as a cosmetologist. I mean someone with a curling iron has more education and training than people who have a gun. That’s insane.”

So the San Francisco police union decided to send a letter to Jed York, President and CEO of the 49ers, and Roger Goodell, Commissioner of the NFL, expressing their “distaste” for being called racist murderers.  Among other things the SF police union says that Kaepernick has “embarrassed himself, the 49er organization, and the NFL.”  The police also solicited Kaepernick’s opinion on the “murder of 40 police officers in the United States in the past few months” or the “8,000 murders that African Americans inflicted on one another in 2015.”

“While we certainly acknowledge Mr. Kaepernick’s first amendment right to remain seated during the National Anthem, as inappropriate as that may be, we will not stand by while he attacks police officers in this country with such statements as as, ‘People are on paid leave while people of color are killed.’”

“Not only does he show an incredible lack of knowledge regarding our profession and ‘officer involved’ shootings, but also shows a naivety and total lack of sensitivity towards police officers. Ironically it is those officers who have on numerous occasions protected Mr. Kaepernick and have ensured that the venues where the NFL holds its events are fully protected.”

“In short, Mr. Kaepernick has embarrassed himself, the 49er organization, and the NFL based on a false narrative and misinformation that lacks any factual basis.”

“Perhaps Mr. Kaepernick could comment on the murder of 40 police officers in the United States in the past few months, or the assaults perpetrated on over 100,000 law enforcement officers in the past year.  Perhaps he could lend his commentary to the over 8,000 murders that African Americans inflicted on one another in 2015.  The law enforcement community cannot be continuously blamed for all of society’s problems, including racial divide, in our country.  It isn’t fair and it isn’t true.”

“Until then we hope your organizations choose to do the right thing and at least apologize to the many police officers Mr. Kaepernick has disrespected for no apparent reason.“

The letter from the SFPOA can be read in its entirety below: 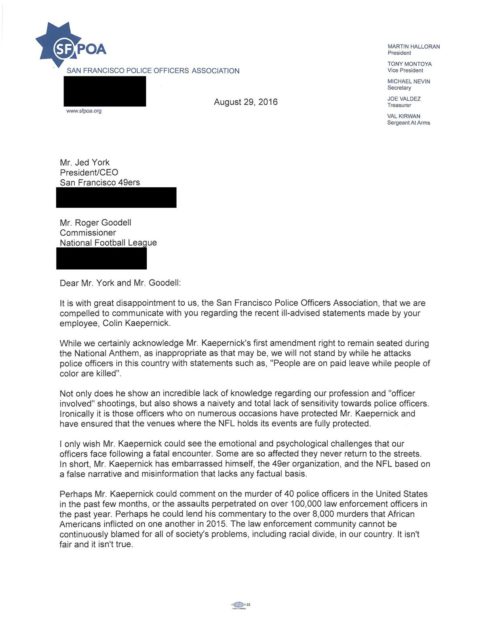