With Hillary Clinton continuing her run of days without a press conference, the nation is growing increasingly concerned as day after day more headlines – from even the mainstream media – cast shadows over her actions as Secretary of State. With more records reported to be released tomorrow, AP reports another nail in the coffin of Clinton honesty today as The State Department is forced to admit that The FBI has discovered dozens of emails related to Benghazi that Clinton failed to hand over. 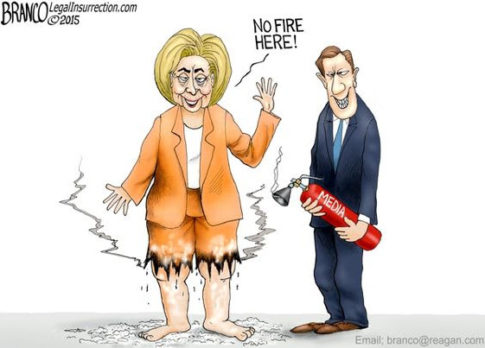 As AP reports,The State Department says about 30 emails involving the 2012 attack on U.S. compounds in Benghazi, Libya, are among the thousands of Hillary Clinton emails recovered during the FBI’s recently closed investigation into her use of a private server.

Government lawyers told U.S. District Court Judge Amit P. Mehta Tuesday that an undetermined number of the emails among the 30 were not included in the 55,000 pages previously provided by Clinton to the State Department.

The hearing was held in one of several lawsuits filed by the conservative legal group Judicial Watch, which has sued over access to government records involving the Democratic presidential nominee. The State Department has said the FBI provided it with about 14,900 emails purported not to have been among those previously released.

Clinton previously had said she withheld and deleted only personal emails not related to her duties as secretary of state.

The agency said it would need until the end of September to review the
emails and redact potentially classified information before they are
released.

However, as Bloomberg notes, the judge in Judicial Watch’s case is pressuring State to release the emails earlier…

U.S. judge sets Sept. 6 deadline for government lawyers to tell him the number of newly discovered messages from Hillary Clinton’s private e-mail servers relate to the 2012 attack in Benghazi and how quickly they can be cleared for public release.

In a separate development Tuesday, a law enforcement official told The Associated Press that the FBI is expected to release documents soon related to its investigation, which focused on whether Clinton and her aides mishandled government secrets.

The official, who was not authorized to discuss the matter by name and spoke on condition of anonymity, said documents in the case would be made public as the FBI responds to Freedom of Information Act requests. It wasn’t immediately clear when the documents would be released or exactly what they would include.

Though he described Clinton’s actions as “extremely careless,” FBI Director James Comey said his agents found no evidence that anyone intended to break the law and said “no reasonable prosecutor” would have brought a criminal case.

The FBI this month provided Congress portions of its file from the agency’s yearlong investigation. The FBI interviewed Clinton for several hours at FBI headquarters in Washington just days before announcing its decision to close the investigation. The Justice Department accepted the FBI’s recommendation.

CNN reported that the records could be made public as early as Wednesday.

We have a presidential candidate who has deleted emails and done things illegally…That doesn’t make sense to me because if that was any other person you’d be in prison. So, what is this country really standing for?