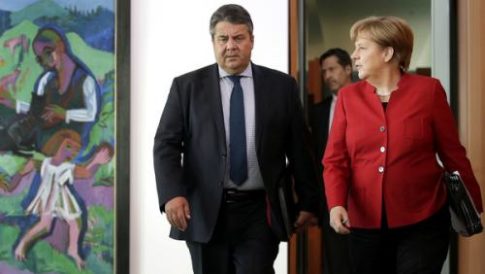 – German Vice Chancellor Warns UK “Must Pay For Brexit” Or Europe Would Go “Down The Drain”:

Germany’s outspoken economy minister, and Angela Merkel’s vice-chancellor, Sigmar Gabriel continued to make waves over the weekend when he attacked her handling of the migrant crisis, forcing the German chancellor to defend her refugee policy and firing the gun on the campaign for a general election next year. Gabriel, leader of the left-leaning Social Democrats and Ms Merkel’s junior coalition partner, called for a cap on the number of migrants entering Germany, saying the government had “underestimated the challenge” of integrating the 1million refugees who arrived in 2015.

As the FT comments, his remarks show how battle lines are being drawn between Germany’s main parties ahead of next year’s election. As reported last night, his remarks coincide with a poll showing that one in two Germans did not want Ms Merkel, who has been chancellor since 2005, to remain in the post after next year’s elections. She has refused to confirm whether she will stand again.

In a television interview on Sunday, Ms Merkel said “much had been achieved” in overcoming the refugee crisis, but there remained “lots still to do”. She expressed no regrets about her decision last year to throw open Germany’s borders to asylum-seekers, a move that has damaged her CDU party’s prospects in next year’s elections and led to the rise of Alternative for Germany, an insurgent party whose call for strict controls on immigration is resonating with millions of voters.

Mr Gabriel has called for a migrant cap based on Germany’s capacity to successfully integrate newcomers, a move Ms Merkel has always ruled out. His intervention is significant because it is usually the CDU’s Bavarian sister party, the CSU, that criticises her open-door refugee policy rather than the SPD, which has been much more supportive. Mr Gabriel said the country needed 25,000 more teachers, for example, for the 300,000 additional schoolchildren who had come into the country. “You can’t repeat that every year,” he added.

In her interview, Ms Merkel listed the measures her government had taken to improve the process of integrating foreigners, including hiring thousands more officials to work in the country’s refugee agency, speeding up the deportation of migrants denied asylum and introducing tough new rules to encourage refugees to learn German and attend integration courses or face sanctions.

However, recent polls show that many in Germany are unconvinced about the country’s ability to absorb so many foreigners, many of them Muslims from Iraq and Syria.  Such misgivings increased after two terror attacks in Bavaria in July committed by refugees with links to the militant group Isis.

Sensing a political opportunity, Gabriel said it was not enough to keep repeating “we can do this” — the Merkel catchphrase that has become a leitmotif on the issue. “They have to create the preconditions for us to achieve this,” he added.

That was not all. Having slammed Merkel’s foreign policy, the ascendant vice-chancellor then focused on foreign policy and said that Britain must not be allowed to “keep the nice things” that come with EU membership without taking responsibility for the fallout from Brexit.

As Theresa May called a cabinet meeting to discuss the UK government’s Brexit strategy on Wednesday, Gabriel warned if the issue was badly handled and other member countries followed Britain’s lead, Europe would go “down the drain, the Guardian reported, noting that the “UK must pay for Brexit.”

“Brexit is bad but it won’t hurt us as much economically as some fear – it’s more of a psychological problem and it’s a huge problem politically,” he told a news conference.

Gabriel lamented that in the aftermath of Brexit, “the world now regarded Europe as an unstable continent” adding that “if we organise Brexit in the wrong way, then we’ll be in deep trouble, so now we need to make sure that we don’t allow Britain to keep the nice things, so to speak, related to Europe while taking no responsibility,” Gabriel said.

Since Britain’s 23 June referendum vote to leave the European Union, all eyes have been on Germany to indicate a way out of danger for the 27 members who will remain, and so far Germany has been stuck in a holding pattern, unable to provide much needed guidance to its European peers. In an interview with German broadcaster ARD on Sunday, Merkel said: “We all agree in the European Union that Britain’s exit, the result of the referendum, has a big impact.”

“Rather than rushing into activities, we should perhaps first take time to think about what we, as the 27 countries, must do better,” she said, adding that this was the direction that talks with partner countries were going in.

Last Wednesday, during the latest toothless European summit, Merkel said remaining member states must listen to each other carefully and avoid rushing into policy decisions. “If you do it wrong from the beginning and you don’t listen – and act just for the sake of acting – then you can make many mistakes,” the conservative German leader said.

Meanwhile, the sharp rhetoric is expected to escalate as Europe is unable to negotiate Brexit and formalize its decision until the UK invokes Article 50, something which will likely not take place until next year. A British government spokesman said in mid-August that prime minister Theresa May will not begin formal divorce talks with the EU before the end of the year.

Disappointed EU leaders, facing mounting nationalist pressures of their own, are refusing to countenance a “Europe a la carte” the Guardian concludes, by letting Britain select the parts of its future relationship that it may like, such as access to the bloc’s single market of 500 million consumers, while dispensing with EU principles such as the free movement of people.

Lamentably for Europe, just as central banks have recently become far more open and direct about how powerless they truly are to remedy the global economic contraction, so the post-Brexit fallout, whose adverse impact on the British economy has yet to be determined, is exposed just how frail the European experiment has become, and should one more anti-European party win in domestic elections, the entire mirage of a successful united Europe may finally be revealed for the empty facade it has been since day one.