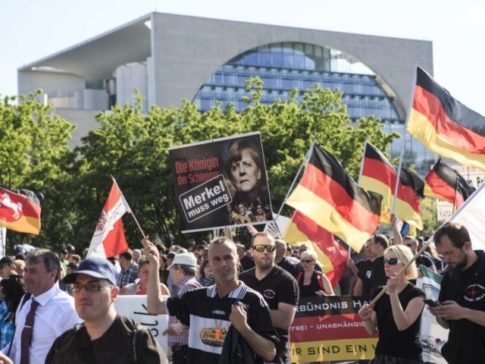 – Half of Germans Don’t Want Merkel to Serve a Fourth Term:

BERLIN (Reuters) – German Chancellor Angela Merkel’s domestic popularity has declined, a poll showed on Sunday, with 50 percent of Germans against her serving a fourth term in office after a federal election next year.

A series of violent attacks on civilians in July, two of which were claimed by Islamic State, have focused attention on Merkel’s open-door migrant policy, which allowed hundreds of thousands of migrants from the Middle East, Africa and elsewhere into Germany last year.

Half of the 501 people questioned in the Emnid poll for the Bild am Sonntag newspaper were against Merkel staying in office beyond after the 2017 election, with 42 percent wanting her to remain.

In November, the last time Bild am Sonntag commissioned a survey on the issue, 45 percent had been in favour of Merkel serving a fourth term, with 48 percent against.

The head of Germany’s Federal Office for Migration and Refugees (BAMF), Frank-Juergen Weise, told the newspaper that he expects a maximum of 300,000 refugees to arrive in Germany this year.

Merkel, asked about her plans for the 2017 election in an interview with regional newspapers published on Tuesday, said: “I will comment on that at the appropriate time. I’m sticking to that.”