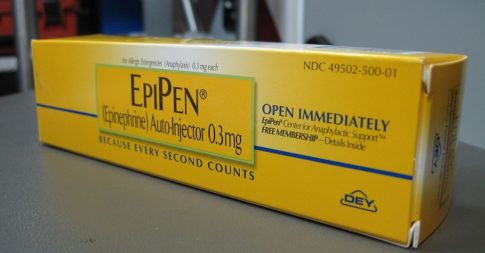 – The EpiPen Scandal Is Worse Than You Think: What You’re Not Being Told:

The EpiPen is a useful device for individuals who suffer from severe allergies. So when news broke that Mylan, the sole maker of the autoinjector “pens” in America, had hiked the prices of its products from $57 each in 2007 to $600 for a package of two in 2016, news outlets had a field day.

Promptly after, politicians seized the opportunity to bank on this crisis by promising to “do something.”

Presidential hopeful Hillary Clinton urged Mylan to voluntarily slash the prices of its products while promising that, once she’s elected, her “plan to address exorbitant drug price hikes like these” will be finally implemented. This is a particularly empty promise considering Mylan has donated between $100,000 and $250,000 to the Clinton Foundation, which was recently revealed to be peddling influence in exchange for cash.

Senators Susan Collins (R-ME) and Claire McCaskill (D-MO) are also pressuring the manufacturer to disclose more about its pricing. Even Senator Joe Manchin (D-WV) — whose own daughter, Heather Bresch, serves as Mylan’s CEO — weighed in, claiming he, too, shares his colleagues’ “concerns about the skyrocketing prices of prescription drugs.”

But none of what these politicians are saying rings true to anyone who’s paying attention. Here’s why.

The Monopolistic Origins of the EpiPen

The autoinjector known as the EpiPen provides injections of epinephrine in cases of serious or even life-threatening allergy attacks. It is derived from another product known as the Mark I NAAK ComboPen, a device created for a monopoly: the U.S. military.

The device was designed by Sheldon Kaplan for Survival Technology, Inc., a company with a long history of working with the Pentagon. Once the ComboPen was created, it was sent to the U.S. military to treat soldiers who had been exposed to nerve agents.

In 2007, Mylan “purchased the generic drugs division of Germany’s Merck KGaA for $6.7 billion,” acquiring the EpiPen brand of autoinjectors. Under Merck, the devices cost $7 each, which resulted in just $200 million in gains each year, a mere 5 percent of Merck’s revenue at the time.

But Bresch saw potential in this simple plastic device and focused on how to make the newly purchased brand something that could be widely used. For her dream to come true, she needed the assistance of experts in the monopoly business. That’s when she turned to the U.S. government for help.

The FDA, Washington, and Crony Capitalism Are All to Blame

Though the EpiPen is not covered by patent protection, Bresch’s close relationship with Washington may have helped her company ensure competition wasn’t an issue.

In an article for the Mises Institute, Jonathan Newman writes that “Mylan has been repeatedly protected from competition, and it has repeatedly (and predictably) increased the price of EpiPens in response.”

According to Bloomberg, Mylan has been aggressive in its approach to regulators.

For the past seven years, Bresch has been “[turning] to Washington for help. Along with patient groups, Mylan pushed for federal legislation encouraging states to stock epinephrine devices in schools.”

In 2010, when the FDA launched new federal guidelines related to epinephrine prescriptions, Mylan stopped selling single pens, switching to twin-packs. Bloomberg reports that, at the time, “35 percent of prescriptions were for single EpiPens,” but as the new rules were implemented, Mylan “changed label rules to allow the devices to be marketed to anyone at risk.” While the guidelines targeted persons who had severe allergic reactions only, Bresch saw the rule changes as “big events that we’ve started to capitalize on,” she said in October of 2011.

After a seven-year-old died due to an allergic reaction to peanuts at a Virginia school, Congress passed a law pressuring states to ensure its schools had epinephrine devices on hand at all times. The year this bill passed, Mylan spent over $1 million in lobbying alone. Now, Bloomberg reports, “47 states require or encourage schools to stock the devices.”

As part of the EpiPen popularization plan, Mylan started handing out “free EpiPens to more than 59,000 schools” in 2012. In 2014, the company allegedly spent $35 million on TV ads, and in 2015, Mylan signed a deal with Walt Disney, stocking theme parks and cruise ships with the devices. Between 2012 and 2015, the company also spent over $6 million in lobbying.

Over the past seven years, Bresch’s persistence and power-driven attitude helped the company spread the EpiPen far and wide, causing its use to grow 67 percent in the United States. EpiPen prescriptions are now so common that pediatric allergist Robert Wood from Johns Hopkins University School of Medicine says EpiPen is the new “Kleenex.”

But making the EpiPen so popular wasn’t an easy task, mostly because Mylan finally bumped into some competition along the way.

Competition Drives Prices Down — And Mylan Wasn’t Down with That

In 2009, Pfizer Inc., the world’s biggest drugmaker, and Mylan sued Teva Pharmaceutical Industries Ltd. over a patent-infringement. At the time, the Israeli company was accused of using Mylan’s design without permission. But in 2012, both parties reached an agreement, and Teva was allowed to seek approval from the FDA for its epinephrine injecting device.

According to Gizmodo, Teva has failed to obtain approval from the FDA to develop affordable generic versions of the EpiPen. The company says it won’t try to go through the same process again until 2017.

The only other device that was closer to competing with Mylan’s EpiPen was Auvi-Q, and it was also driven out of the market. In 2015, the company launched a recall campaign claiming the devices could be delivering faulty dosages.

“Epinephrine is extremely cheap,” reported Jonathan Newman. In order to understand why Mylan was able to raise the prices of EpiPen, we mustn’t look at the device or drug. We also cannot blame the markets for this issue. Instead, we must look at how Mylan keeps competition at bay.

In a free market scenario, “[a] firm cannot just willy-nilly raise their prices without a competing firm leaping in to give consumers what they want at a lower price,” Newman explains. But in the real world, “Mylan has a great friend who keeps would-be competitors out of the market, or at least makes it so difficult for them that they eventually go out of business.” Mylan’s friend, in this case, is the FDA — a government agency.

Without the ability to pay corporations any favors, Washington power players would not be passing resolutions and pieces of legislation that benefit Mylan. In order to understand why Mylan’s monopoly over the EpiPen has driven the prices up, we must look at the system at hand.

The current environment favors this influence game played by both government officials and corporate drones, but ultimately, the consumer pays the price for their follies. And that’s why few members of the mainstream media are taking the time to explain this relationship. Mostly because, they too, are involved in this systemic influence scheme.