Law enforcement’s treatment of dogs is just a symptom of the militarized policing so many of our neighborhoods are subjected to.

– Programmed to Kill: The Growing Epidemic of Cops Shooting Dogs 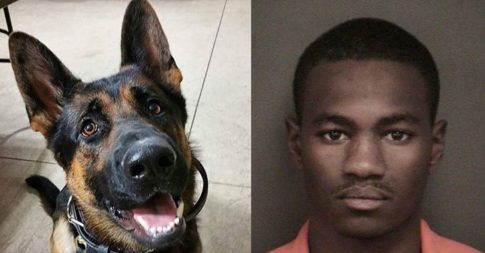 – Man Who Killed Police Dog Sentenced to 45-Years in Prison:

A 23-year-old Ohio man has been sentenced to 45 years in prison after exchanging gunfire with Canton police in January. This week, a judge sentenced Kelontre Barefield to be incarcerated for 11 years on multiple burglary charges and 34 years for the death of Jethro, a three-year-old German Shepherd who served as a member of the department’s K-9 unit. Both sentences are to be served consecutively.

Barefield pled guilty to charges pertaining to the death of the canine and various other charges in an unrelated aggravated robbery case.

According to the head trainer of Canton PD’s K-9 unit, Eric Stanbro, Jethro died after being shot three times while responding to Barefield’s robbery of Fisher Foods, a local Canton grocery store. Police shot Barefield in the ankle during the altercation.

In March, a letter of condolence for Jethro to the department from an 11-year-old girl went viral.“I [sic] sorry about Jethro. So here is my allowance for the bulletproof vests. God bless you and the dogs,” it read.

The death of Jethro prompted state lawmakers to introduce a bill that would make the punishment for killing a police K9 more severe.

In a similar case, in 2014, a West Palm Beach, Florida teenager received a 23-year sentence for shooting and killing a five-year-old police dog during an armed robbery of a police officer’s home in 2012.

In contrast, police have made a habit of executing family dogs — sometimes while raiding the wrong homes — often evading accountability.