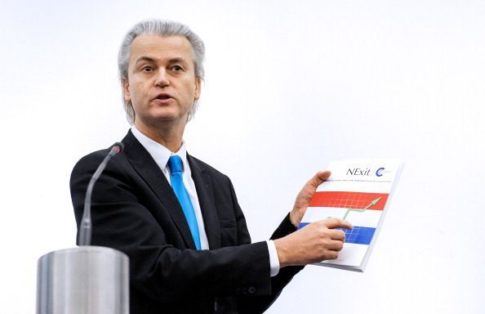 – Geert Wilders: Close All Mosques In The Netherlands:

Leader of Netherlands’ most popular party Geert Wilders has proposed a closure of all Mosques in the country and a total ban on the Koran ahead of the 2017 general election.

Leader of the populist Party for Freedom (PVV) Geert Wilders has proposed the most radical anti-Islamisation platform for any party in European politics. Wilders, whose PVV are currently top of all major polls in the Netherlands, has declared that the new platform for the party ahead of the general elections in 2017 will include the plan to close all Mosques in the country and place a ban on the Islamic holy book, the Koran. Wilders claims that the move is to counter the Islamisation he sees ongoing in the country reports Belgian paper Demorgen.

The PVV platform for the 2017 election was released by Wilders first via his Twitter account and carried the theme of “de-Islamisation.”  The PVV states that it would like to see not only a closure of all the mosques in the country and a ban on the Koran but also a ban on the Islamic headscarf for women in any public setting. Asylum seekers were also mentioned by the document which wants to repeal all temporary residency permits for all asylum seekers and close all asylum centres in the country.

Like many countries in Europe the Netherlands has had an issue with it’s citizens who have gone off to fight for the Islamic State in Syria and Iraq returning home. The PVV is clear on its position regarding these current or former Islamic State fighters saying that any ISIS members will not be allowed to return to the Netherlands.

The new platform makes a sharp increase in pressure from the party against Islamisation. During the last parliamentary campaign the PVV proposed to allow up to a thousand asylum seekers into the country per year. The ongoing migrant crisis and multiple acts of terror in European cities over the past few months has influenced the opinion of Wilders and the party who are known as one of the toughest on Islamism in Europe.

Wilders himself says he is, “incredibly proud of the draft,” of the party platform and reaffirmed his commitment to follow the United Kingdom out of the European Union. Wilders has long been an advocate of getting the Netherlands out of the political bloc who he claims stifle any meaningful asylum of immigration policy passed by the Dutch parliament.

Earlier this year writing exclusively for Breitbart London Wilders called for a “Patriot Spring” across Europe and North America. As Austrian Freedom Party presidential candidate Norbert Hofer leads in polls ahead of the October 2nd Austrian Presidential election, the German Alternative for Germany have become the 3rd largest party in Germany and Wilders PVV  are projected to win at least ten seats more than the current ruling party, the patriot spring may have begun.