Remember when Obama toured around the country telling everyone that Obamacare was going to increase competition and lower premiums?  If not, here is an example to help jog your memory (comments taken from Obama remarks delivered at Prince George’s Community College on 9/26/13):

It’s buying insurance on the private market, but because now you’re part of a big group plan — everybody in Maryland is all logging in and taking a look at the prices — you’ve got new choices.  Now you’ve got new competition, because insurers want your business.  And that means you will have cheaper prices.  (Applause.)

Well, as we’ve pointed out numerous times things are not really playing out as Obama had hoped with premiums skyrocketing (see “Obamacare On “Verge Of Collapse” As Premiums Set To Soar Again In 2017“) and “competition” collapsing (see “Tennessee Insurance Commissioner Warns Obamacare “Very Near Collapse“”).

The two maps below prove that point beautifully by illustrating the epic collapse of Obamacare coverage in just 1 year.  A collapse that will leave a stunning number of people across the country with only 1 option for health insurance.  Meanwhile, healthcare shoppers in Pinal
County, Arizona will actually be left with no options in 2017 as all carriers have abandoned service there. (charts per the New York Times) 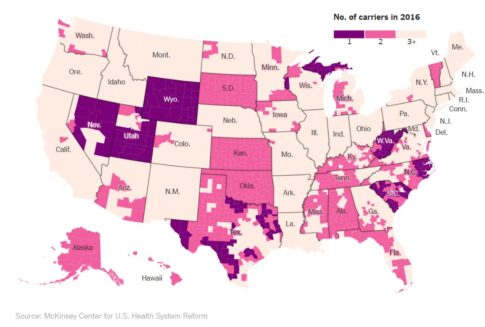 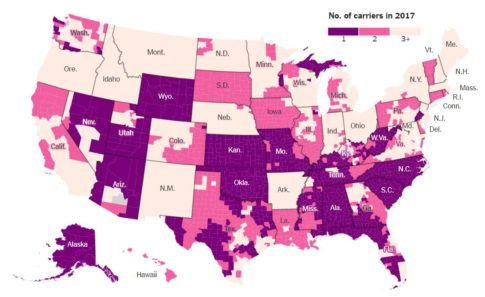 Meanwhile, the Obama administration continues to insist that all is well with the Affordable Care Act.  Per the New York Times:

The Obama administration says it is too early to evaluate competition in the Obamacare markets for 2017. Marjorie Connolly, a spokeswoman for the Department of Health and Human Services, said: “A number of steps remain before the full picture of marketplace competition and prices are known. Regardless, we remain confident that the majority of marketplace consumers will have multiple choices and will be able to select a plan for less than $75 per month when Open Enrollment begins Nov. 1.”

The first step is admitting you have a problem.